In 2010, an earthquake of high magnitude tore through Haiti, the poorest country in the Western Hemisphere, causing destruction on a scale that most people can’t even imagine.  More than 200,000 lives were lost and another 2 million people were displaced when their homes were destroyed.  All health services were interrupted, and health indicators, including vaccination rates, plummeted.  In the 5 years since the earthquake, CDC has been heavily investing in rebuilding Haiti’s capacity to deliver potent vaccines to every child.  Appropriate use of vaccines can stop the spread of vaccine-preventable diseases (VPDs) by reducing the number of people who are at risk of infection and decreasing the likelihood that diseases will cross borders and spread  to neighboring countries. Here are a few highlights of CDC support:

1. Ensuring protection against measles and rubella 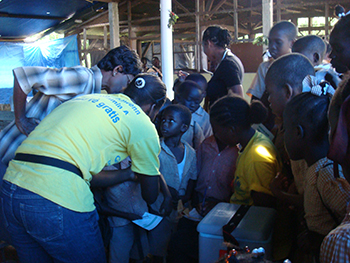 Bystanders peer in to get a closer look at the vaccinator giving the measles-rubella shot before their turn. Photo courtesy of Rania Tohme/CDC.

The issue: Although a dose of measles-rubella (MR) vaccine is routinely recommended for children aged 9-11 months in Haiti, only 59% of Haitian children younger than 1 year of age received MR vaccine in 2011. In general, high coverage (>90%) with two doses of MR vaccine is necessary to ensure that a country’s population is protected from the spread of measles or rubella viruses.

CDC also designed and funded a national vaccination coverage survey to evaluate the success of the MR campaign by determining the percentage of children in the target age group (1-9 years of age) who were vaccinated. A team of 25 CDC-trained Haitian interviewers went door-to-door to administer the questionnaire to 7,000 households with 10,000 children.

The MR vaccination campaign was instrumental in increasing immunity to measles and rubella among children in Haiti.

The issue: Unreliable energy sources and dependence on propane gas refrigerators left many health facilities without the means to properly store vaccines to keep them potent. 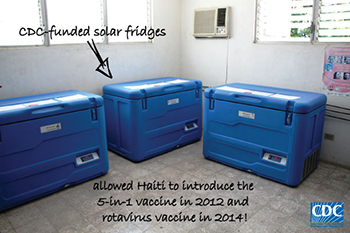 The solution: In 2012-2014, CDC funded the installation of 3 new cold rooms in the central vaccine warehouse and the purchase of 78 solar refrigerators to be used at the department (“state”) level. In 2014, CDC funded and hired a cold chain specialist focal point to advise and assist the immunization program on cold chain projects to ensure safe vaccine storage.

In 2015, CDC is funding the installation of 49 new refrigerators and the optimization of 153 previously installed solar refrigerators in health facilities.

These infrastructure improvements facilitated the introduction of pentavalent vaccine (the 5-in-1 vaccine that prevents diphtheria, pertussis, tetanus, hepatitis B and Haemophilus Influenzae Type B/Hib) in 2012 and rotavirus vaccine in 2014 and will facilitate the introduction of vaccines that protect against pneumonia in 2015. CDC studies that estimated the magnitude of illness from respiratory and diarrheal diseases in Haiti helped justify the introduction of rotavirus and pneumococcal vaccines and will help in evaluating the impact of those vaccines after introduction.

3. Responding to an unprecedented cholera outbreak 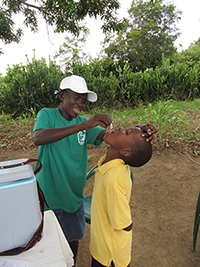 Boy receiving the oral cholera vaccine at a vaccination post in a rural area. Photo courtesy of Benjamin Dahl/CDC.

The issue: The cholera outbreak in Haiti since 2010 is one of the largest cholera epidemics ever recorded in a single country. In August and September 2013, MSPP conducted an oral cholera vaccination (OCV) campaign for the first time ever; targeting almost 108,000 persons aged 1 year and older in two affected areas, and needed some help with monitoring and evaluating the campaign.

The solution: In collaboration with MSPP, CDC funded and implemented a vaccine coverage survey which showed that the OCV campaign achieved good coverage.

In 2014, an OCV campaign was implemented in 7 additional communes (districts) in Haiti, targeting almost 200,000 individuals. CDC provided technical assistance during the planning for the campaign, and CDC teams helped monitor the two vaccination rounds. CDC also provided technical assistance for implementation of a coverage survey after the campaign.

The issue: The 2010 earthquake devastated an already weak routine immunization system. There was dire need for training immunization staff in order to get the program back on its feet to provide services.

The solution: In March 2014, CDC, MSPP and PAHO trained 30 immunization staff on the use of vaccination recording forms, analysis and interpretation of vaccination data, and calculation of vaccine needs. These trained professionals, in turn, trained vaccinators in health facilities to use the same concepts, enabling them to identify and address weaknesses in the immunization program and to improve vaccine coverage. Participants found the interactive case studies and exercises to be highly instructive and enjoyable, and they requested similar methodologies for future trainings. 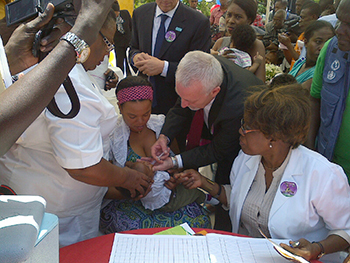 The issue: There is a high risk of VPD importation of in Haiti, which can readily spread in the population because of low vaccination coverage and weak sanitation infrastructure. Therefore, a good VPD surveillance system is needed to detect and respond quickly to outbreaks.

To respond to this need, CDC developed and conducted a 4-day training workshop on VPD surveillance and outbreak response. More than 50 people participated, including epidemiologists, data managers, immunization program managers, and laboratory technicians. All the participants were satisfied with the training, and felt that their knowledge had improved.

CDC also provided financial and technical support to MSPP to establish 6 sentinel sites for rotavirus and meningitis surveillance. Data from those sites will help document the impact of rotavirus and pneumococcal vaccines after they are introduced.

CDC will continue to provide technical and financial support to strengthening immunization services in Haiti.  In addition to protecting children in Haiti with life-saving vaccines, these efforts also protect other countries in the Americas from VPD importations. Future projects in Haiti include support for improving valid documentation of vaccine doses administered to children, purchasing of additional solar refrigerators for health facilities,  achieving and verifying maternal and neonatal tetanus elimination (Haiti is the only country in the Americas where neonatal tetanus has not been eliminated), and determining the disease burden of chronic hepatitis B virus infection in order to assess the need for introducing a birth dose of hepatitis B vaccine.