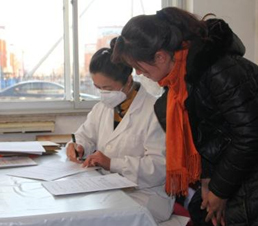 “We now know we have the ability to conduct international public health projects and we are very proud of ourselves to build trust with local village doctors because they know we care about their safety.” - YAN Daiqin, Director of Bayan Nur Tuberculosis Dispensary, Bayan Nur, Inner Mongolia

CHINA HAS THE SECOND HIGHEST TUBERCULOSIS (TB) BURDEN IN THE WORLD with 5.23 million TB patients; approximately 350,000 of these have multi-drug-resistant (MDR-TB). Many TB patients in China are low-income rural residents who often first seek medical care in village clinics. Thus, village doctors probably have an increased risk of TB exposure. In November 2011, US CDC in China collaborated with China CDC to assess TB infection and disease as well as TB infection control knowledge and practice among Chinese village doctors in Bayan Nur, Inner Mongolia. Located in northwestern China, Inner Mongolia has some of China’s highest rates of TB including MDR-TB. Bayan Nur is a major agricultural region in Inner Mongolia.

MANY VILLAGE CLINICS DO NOT HAVE RUNNING WATER and soap for proper hand hygiene. US CDC and collaborators investigated the hand hygiene practices in such environments. As part of the TB survey some participating village doctors received alcohol-based hand sanitizer. A telephone-based questionnaire was administered to evaluate the acceptability and feasibility of using hand sanitizer for sanitizing hands among village doctors. The self-reported hand hygiene compliance was low, but acceptability of hand sanitizer was high as long as it’s provided free or at low cost. “We would like to receive more alcohol-based hand rub to use at work” stated many of the village doctors interviewed.

“THEY HAVE A BETTER UNDERSTANDING OF THE RISKS NOW and they have become aware that good infection control knowledge and practice can protect them from being infected at work. The early detection and timely treatment of village doctors who have active TB can also provide protection to their colleagues, families and friends,” said Dr. Yan Daiqin of the collaboration with his Bayan Nur Tuberculosis Dispensary.