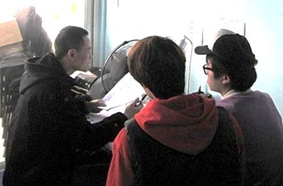 “I’m fortunate to know my boyfriend is HIV positive, as I will now use protection and re- test for HIV regularly in the future." - Wang Kai, participant in male couples HIV counseling and testing

XIAO LIN AND WANG KAI PARTICIPATED IN a male couples HIV counseling and testing program at Chengdu Tongle Gay Care Organization. The test results showed that Xiao Lin was HIV-positive and Wang Kai was HIV-negative. After the counseling, Xiao Lin said that Wang Kai showed great concern for him and reassured him that they would stay together and continue their loving relationship. This is one among many positive stories from the couples counseling and testing program piloted and now widely adapted by China CDC with support from U.S. CDC in China.

MORE THAN 20 YEARS AGO the challenges of individual HIV counseling and testing were realized through working with pregnant women. After women learned of their HIV status they worried about disclosing the results and struggled to convince their partners to test. In response, experts at Emory University developed a unique counseling and testing program for couples. In 2009 it was adapted for use with male couples in the U.S. and quickly expanded to South Africa and China.

CHINA’S HIV EPIDEMIC IS largely concentrated among injecting drug users and men who have sex with men. An increasing percentage of new cases have occurred due to sexual transmission. To increase prevention activities among men who have sex with men, a pilot program of counseling and testing for male couples was conducted in Chengdu, Sichuan in 2011. Fifty-three couples were enrolled, with nearly 20% having only one partner with HIV-positive results. Among the participants, counseling and testing was well accepted, reducing disclosure burdens, and increasing mutual support between partners. “Couples testing and counseling had not previously been implemented in China but it has the potential to greatly improve HIV prevention interventions and long-term communication between couples at-risk,” observed Dr. Leland Li, Chief Medical Officer for U.S. CDC in China.

COUNSELING AND TESTING A COUPLE TOGETHER eliminates many weaknesses of individual counseling and testing. The counselor creates a safe environment for results disclosure, tailors counseling messages based on both partners’ HIV status, facilitates cooperation for behavioral risk reduction, and, if necessary, encourages planning for future treatment and care. Research among heterosexual partners has shown that this reduces HIV transmission between partners each year by nearly one-third. In 2011, after learning the results of the pilot program, China CDC incorporated a male couples counseling and testing curriculum into the national training plan for counselors. Experts from U.S. CDC and Emory University will continue to support counseling and testing efforts among populations in need.