One World, One Health - Studying the link between animal and human disease transmission in China 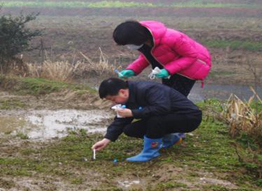 "Discovering the links between animal and human health is both novel and timely. The work here in China will help provide clues to help protect the health of people in China, the U.S. and the world." - Dr. Jeffrey McFarland, Director, U.S. CDC in China

CHINA IS ONE OF THE FEW COUNTRIES that has been affected by the Highly Pathogenic Avian Influenza H5N1 endemic, and U.S. CDC’s presence in China offers the two countries an opportunity to collaborate on research on this global health problem. The endemic is deadly for avian populations and poses serious threats to public health. Avian influenza viruses circulating among wild bird or poultry populations have the potential to combine with human influenza viruses. There have been sporadic fatal cases of human H5N1 influenza resulting from direct or close contact with infected poultry. If these viruses combine so that efficient and sustained transmission among humans becomes possible, an influenza pandemic could result, causing large scale illness and death worldwide.

THE COMPLEX INTERPLAY between human health, the health of animals, and the environment is extremely vital to prevent H5N1 transmission. Prevention and control of infectious diseases requires close collaboration between human and animal health sectors. U.S. CDC in China promotes the concept of “One World, One Health”. U.S. CDC in China, China’s Forestry Administration, China CDC, and Hunan CDC are studying risk factors for people who work closely with bird populations at the Eastern Dongting Lake Wetland Nature Reserve in China’s Hunan Province. The team is researching the role of the human-animal interface by measuring avian influenza virus distribution among fecal and environmental samples of migratory wild birds and poultry. It is also measuring serologic evidence of avian influenza infection among workers at the nature reserve to determine occupational exposure to the virus. The ongoing cooperation between CDCs and the Forestry Administration makes it possible to better understand disease transmission from wild birds and poultry to humans.

THIS STUDY HAS BUILT A CRITICALLY IMPORTANT NETWORK between the human health and animal health sectors at all levels. China’s Forestry Administration has made a strong commitment to continue this cooperative study. In recognition of the achievements already made, the UN’s Food and Agricultural Organization has proposed cooperating with U.S. CDC, China CDC, provincial CDCs and the Ministry of Agriculture to begin a study in 2013 of the influenza viruses in swine and the people who work with swine. This cooperative project may reveal currently unknown and important factors linking animal and human health.