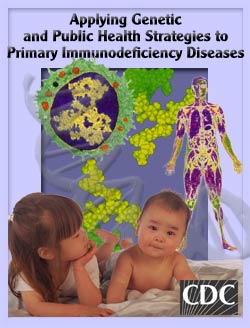 Overview
CDC convened a panel of more than 50 experts in clinical immunology, public health, genetics, and communication from state and federal agencies, academic centers, public health laboratories, professional organizations, and advocacy foundations to identify genetic and public health strategies that can be applied to primary immunodeficiency (PI) diseases. During the 2-day meeting, participants outlined a public health framework for PI diseases that represents a blueprint for a public health approach to single-gene disorders. This framework assesses the impact of these diseases and identifies public health interventions to prevent morbidity, disability, and mortality and to improve health outcomes. Meeting discussions centered on priority public health research questions and recommendations for future action. A meeting summary will be available in early 2002. A complete report of recommendations for public health action will appear in a future issue of MMWR Reports and Recommendations.

Background
PI diseases comprise a diverse group of more than 95 diseases, many of which result from single-gene defects. (1) The genetic defects may affect one or more components of the immune system, including T cells, B cells, phagocytic cells, natural killer cells, and complement proteins. PI diseases are characterized most notably by increased susceptibility to infection. Defects in one or more components of the immune system also cause increased susceptibility for autoimmune diseases and an increased risk of cancer. Advances in molecular biology and genetics over the last decade have led to the identification of the molecular defects associated with approximately three-quarters of the 95 diseases. This new knowledge has, in turn, prompted researchers to develop new diagnostic tools and new therapies, including gene therapy. (2)

Advances in human genetics and the evolution of the Human Genome Project will play a central role in the practice of medicine and public health in the 21st century. As part of a strategic planning process for genetics and public health, CDC has developed a public health framework to assess the role of genetics in specific diseases, including single-gene disorders. This framework outlines how essential public health functions can prevent disease, disability, and death and promote and improve health outcomes among persons who inherit specific genotypes. (3) The public health framework is based on a combined genetic-epidemiologic approach with four components: 1) public health assessment; 2) evaluation of genetic testing; 3) development, implementation, and evaluation of population interventions; and 4) communication and information dissemination. Each of these components requires 1) partnerships and coordination of genetic and public health activities; 2) attention to the ethical, legal, and social issues that can arise when applying genetics to health promotion and disease/disability prevention, and 3) education and training of providers and the public and provision of timely and accurate information. (4)

Public Health Assessment
Public health assessment is the application of traditional public health methods—surveillance, epidemiology, and laboratory science—to assess the impact of discovered genes on community health. In order to translate genetic research into clinical and public health practice, ongoing population-based epidemiologic studies are needed to assess the impact of gene variants on the risk for disease, disability, and death; to identify modifiable risk factors; and to evaluate interventions.

At the meeting, presenters reviewed current efforts to assess the burden and impact of PI diseases, including estimates derived from national and regional disease registries and surveys of PI disease prevalence. They reported on data from U.S. disease-specific registries for chronic granulomatous disease and seven other PI diseases (hyper IgM, X-linked agammaglobulinemia, common variable immunodeficiency, Wiskott-Aldrich syndrome, SCID, leukocyte adhesion deficiency, and DiGeorge syndrome) and from the PI disease registry of the European Society for Immunodeficiency Diseases (ESID). ESID has also established Web-based immunodeficiency mutation databases. One such database, BTKbase, provides information about mutations in the BTK gene that cause X-linked agammaglobulenemia. Additional mutation databases have also been developed.

Laboratory Issues/Evaluation of Genetic Testing
The Secretary’s Advisory Committee on Genetic Testing (SACGT) provides recommendations to the Department of Health and Human Services to enhance the oversight of genetic testing. (5) Criteria to assess the benefits and risks of genetic tests include analytical validity, clinical validity, clinical utility, and social consequences. Post-marketing assessment was identified as a measure that needs to be collected after a genetic test is accepted into clinical practice.

Meeting participants emphasized the importance of the continually developing and maintaining tests for rare genetic diseases and establishing a comprehensive system to collect data on rare diseases. Because the diagnosis of rare diseases is often delayed due to lack of information, physicians who encounter patients with symptoms and signs of rare genetic diseases should have access to information that will help them include such diseases in their differential diagnoses, obtain diagnostic assistance, and locate laboratories that test for rare diseases.

Developing, Implementing, and Evaluating Population Interventions
About one in 20 live-born infants is expected to have a single-gene disorder or a condition with an important genetic component by age 25 years. These infants will account for a disproportionate fraction of premature deaths, pediatric hospitalizations, and health care costs. Many of these conditions and their complications can be reduced by timely and effective intervention and prevention strategies.

The intervention component of the public health framework involves developing intervention strategies for diseases with a genetic component; implementing pilot demonstration projects; and evaluating the impact of interventions on morbidity, disability, health care costs, and mortality. Timely and effective public health interventions can reduce complications from genetic diseases, including PI diseases. These strategies include enhanced early clinical recognition in early symptomatic populations or population-based screening in asymptomatic populations. Early diagnosis, combined with effective therapy such as bone marrow transplantation, intravenous immunoglobulin, and antibiotics, can reduce the burden of these diseases.

Communication and Information Dissemination
Effective communication is key to the success of public health programs involving results from genetic research. Effectiveness will depend on the coordination of communication strategies among various groups, targeting of appropriate audiences with messages that result in health promotion and disease prevention, and provision of messages that are accurate and technically and culturally appropriate. Communication strategies to increase awareness build on the public health assessment of PI diseases and an improved understanding of the uses of new genetic tests, recognition of PI diseases with valid clinical tools, and the impact of early recognition on outcomes. Speakers from organizations and agencies that have developed educational and outreach efforts targeted to patients, providers, and the public discussed their activities; reviewed strategies and successes; identified lessons learned; and proposed recommendations for future education and communication efforts, including how to develop and evaluate activities to enhance early identification and awareness of PI diseases.