Step 5: Solve Point of Contamination and Source of the Food

What epidemiologic data is used to help find the likely source of the outbreak?

Traceback: An investigation that starts with the sick people or restaurants and works its way back through the chain of food production to search for a common point between the people or places to find the contamination source 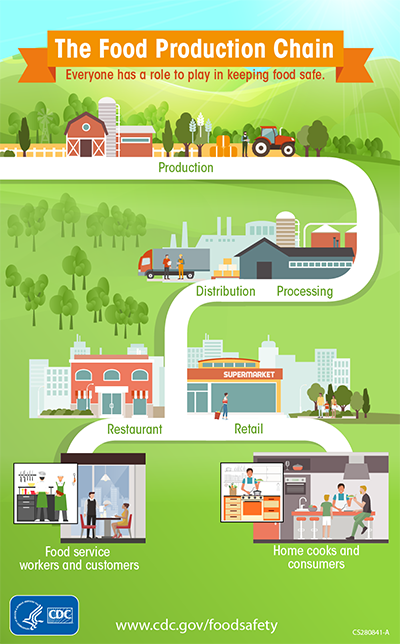 Diagram tracing the movement of food from consumer back to retailers, restaurants, distributors, processors, and producers.

What is a traceback and how is this used to help find the likely source of the outbreak?

How are food and environmental testing used to help find the likely source of the outbreak?

Why can’t investigators link a food to an illness?

It is not unusual to find no statistical association between an illness and any particular food item, even when all the clues point to foodborne transmission. Reasons include:

What if no link is found between a specific food and illness?

When no statistical association between a food and illness is found, it does not mean the illness or outbreak was not foodborne. It means only that the source could not be determined. If the outbreak has ended, the source of the outbreak is declared unknown. If people are still getting sick, investigators must keep gathering information and studying results to find the food that is causing the illnesses.

Next Step: Control an Outbreak >>