Food Safety: A Changing Landscape in a Global World

Global food safety is important for the health of all Americans. Today, the United States imports about 15% of its food supply from more than 200 countries or territories.1,2 Americans want convenience, choice, and diversity in the foods we eat. Imported food helps meet these demands. The Centers for Disease Control and Prevention (CDC) is working with partners around the globe to help keep the world’s food supply safer for everyone. 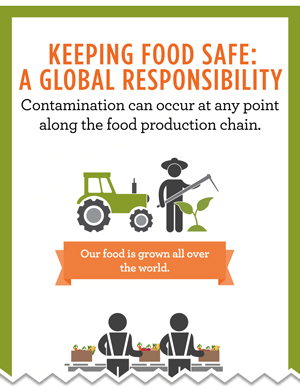 Our Food Travels a Lot Farther Than It Used To

As food production becomes more globalized, the path food travels from farm to table grows more complex. Much of the food we eat in the United States is transported over long distances and distributed across wide areas. For example, about one-third of the fresh vegetables Americans eat and half of the fresh fruits are grown in other countries.3,4 Many fruits and vegetables that were once available only during certain seasons are now offered year-round because of imports. The seafood on our tables is even more global. Each year 85%–95% of seafood eaten in the United States is imported.5

The globalization of food creates new challenges for food safety. Germs can contaminate food at any point along the production chain—while growing on the farm, during harvesting, during transport and distribution, or at a grocery store. If food becomes contaminated anywhere in the production process, people may get sick when they eat it.

Because of the worldwide distribution of many foods, a single point of contamination can make people sick in different parts of the country or even the world. In the summer of 2017, CDC’s PulseNet system detected a Salmonella outbreak that had made dozens of people sick across several states. CDC and its federal and state partners launched an investigation to find out what contaminated food was making people sick. The investigation eventually linked 220 illnesses in 23 states to Maradol papayas from a single farm in Mexico, which led the U.S. Food and Drug Administration (FDA) to increase testing of papaya shipments from Mexico. This Salmonella outbreak was one of four in the United States linked to imported Maradol papayas in 2017.

Food Safety Must Be a Global Priority 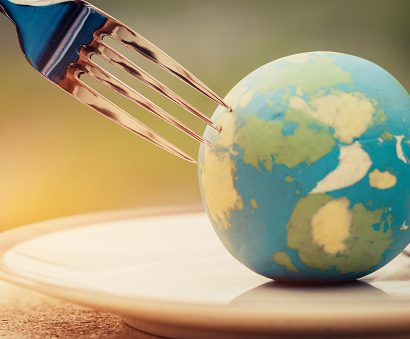 Safe food is a shared global responsibility. The safety of the U.S. food supply depends on the effectiveness of food safety systems in other countries to ensure that imported products are safe. The FDA and the U.S. Department of Agriculture are working to strengthen the international food safety system by making sure imported foods meet the same safety standards as foods produced in the United States. CDC also works with international health authorities to share information on foodborne outbreaks in the United States that may affect other countries. CDC and global partners are working together to protect global food networks.