This study provided a comprehensive set of estimates of how much foodborne illness is accounted for by each of 17 food categories, called “commodities” in the paper. These are our most comprehensive estimates available to answer the question: which foods make us ill?

Each year, roughly 48 million people (1 in 6) get sick from food eaten in the United States. Although major pathogens account for more than 9 million of these sicknesses, linking individual illnesses to a particular food is rarely possible except during an outbreak.

1, 2, 3, and 4. Table 4 provides researchers access to estimated percentages of foodborne illnesses caused by each pathogen that were attributed to each food commodity, by etiology.

Media Advisory: CDC releases first estimates of the food sources of all foodborne illnesses acquired in the United States 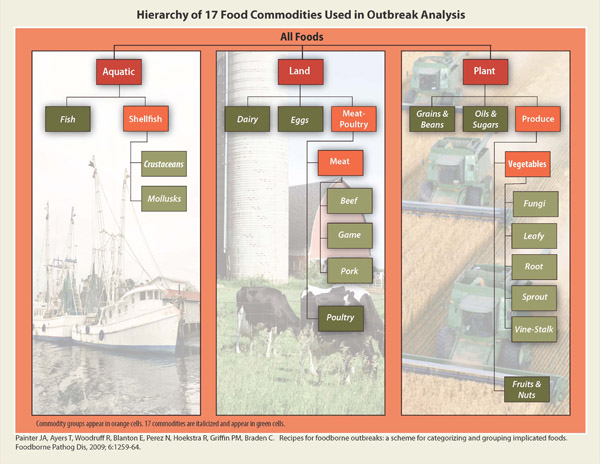 This study addresses the important question: Which foods make us ill?

For the first time, CDC developed a comprehensive set of estimates of the food sources of all foodborne illnesses acquired in the United States. The paper provides a historical baseline of estimates that will be further refined over time with more data and improved methods.

It builds on the estimates of foodborne illness published in 2011 that told us that about 48 million people (1 in 6) get sick each year from food.  More than 9 million of these illnesses are caused by major pathogens [1 page] CDC tracks.

The paper focuses on known causes of illness and uses data from nearly 4600 outbreaks to estimate the number of illnesses attributed to each of 17 food categories (called “commodities” in the paper). This is the first time CDC has attempted such a comprehensive set of estimates.

Why is this paper is important?

This study offers the most comprehensive look to date in attributing illness to specific food commodities based on outbreak data, including those where complex foods (that is, foods that have ingredients from several food categories) were implicated in outbreaks. 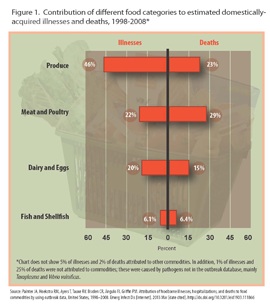 These findings underscore roles of industry and government that help keep food safe. These attribution estimates are important because they can help regulatory agencies and industry target prevention efforts that will improve the safety of the foods that we need and that we love to eat.

We developed a method of attributing illnesses to specific food groups based on a decade of outbreak data, including those that implicate complex foods (that is, foods that have ingredients from several food categories.) Figure A.

Among all types of foods, produce accounted for nearly half of illnesses, which were most often caused by norovirus. However, the CDC emphasizes that a healthy and safe diet that is high in fruits and vegetables is an important part of a healthy lifestyle. The most common food sources of fatal infections were meat and poultry, much due to Salmonella and Listeria. Figure B

The estimates used 4,589 foodborne disease outbreaks reported over the 11 year span from 1998 to 2008. Both the contaminant and the specific food causing the outbreak was reported.

Illness was attributed to all the 17 different food categories. The proportion accounted for by each category varied.

Meat and poultry (a combination of four animal food categories[Beef, Game, Pork, and Poultry) accounted for fewer illnesses, but for 29% of deaths.  Figure E provides examples of foods in these groups.

This paper does not address where contamination of food occurs along the food production chain.  A recent CDC study on “Epidemiology of Foodborne Norovirus Outbreaks, United States, 2001-2008” looked at this issue in relation to norovirus. Here are some of the main findings about the food sources from norovirus: 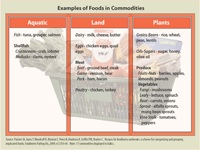 Will you ever be able to tell us the top foods that make us sick?

This study goes a long way toward doing that, and CDC is working to refine the estimates. FDA is working to develop the list of the riskiest foods among the foods that they regulate.

How will CDC partners benefit from this study?

The study provides extensive documentation for industry, consumer groups, and researchers to use and review. Regulatory agencies can use these data to conduct risk analyses required in the rulemaking process.