During week 11 (March 12-18, 2017), influenza activity decreased, but remained elevated in the United States.

Based on National Center for Health Statistics (NCHS) mortality surveillance data available on March 23, 2017, 7.8% of the deaths occurring during the week ending March 4, 2017 (week 9) were due to P&I. This percentage is above the epidemic threshold of 7.5% for week 9.

Two influenza-associated pediatric deaths were reported to CDC during week 11.  Both deaths were associated with an influenza A (H3) virus and occurred during weeks 7 and 8 (the weeks ending February 18, and February 25, 2017, respectively).

A total of 55 influenza-associated pediatric deaths have been reported for the 2016-2017 season.

Nationwide during week 11, 3.2% of patient visits reported through the U.S. Outpatient Influenza-like Illness Surveillance Network (ILINet) were due to influenza-like illness (ILI). This percentage is above the national baseline of 2.2%. (ILI is defined as fever (temperature of 100°F [37.8°C] or greater) and cough and/or sore throat.)

During week 11, the following ILI activity levels were experienced: 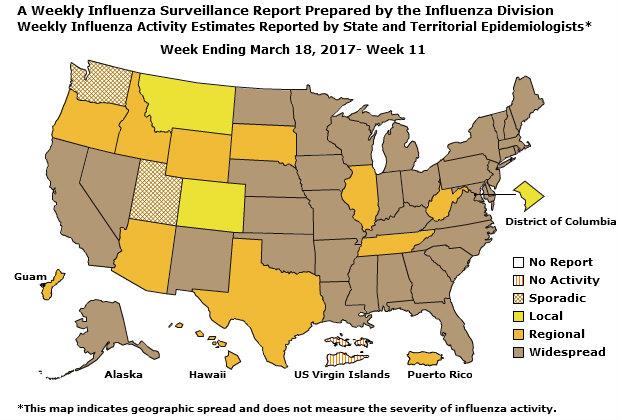