One human infection with a novel influenza A virus was reported by the state of New Jersey. The person was infected with an influenza A (H3N2) variant (H3N2v) virus. The patient was not hospitalized and has fully recovered from their illness. The patient visited a farm near where swine are frequently housed but no direct contact with swine was reported in the week prior to illness onset. No ongoing human-to-human transmission has been identified.

Yamagata Lineage [17]: All 17 (100%) B/Yamagata-lineage viruses were antigenically characterized as B/Phuket/3073/2013-like, which is included as an influenza B component of the 2015-2016 Northern Hemisphere trivalent and quadrivalent influenza vaccines.

Based on NCHS mortality surveillance data available on January 7, 2016, 6.1% of the deaths occurring during the week ending December 19, 2015 (week 50) were due to P&I. This percentage is below the epidemic threshold of 7.3% for week 50.

During week 52, 5.7% of all deaths reported through the 122 Cities Mortality Reporting System were due to P&I. This percentage was below the epidemic threshold of 7.0% for week 52.

Nationwide during week 52, 2.8% of patient visits reported through the U.S. Outpatient Influenza-like Illness Surveillance Network (ILINet) were due to influenza-like illness (ILI). This percentage is above the national baseline of 2.1%.

The increase in the percentage of patient visits for ILI may be influenced in part by a reduction in routine healthcare visits during the holidays, as has occurred in previous seasons.

During week 52, the following ILI activity levels were calculated:

During week 52, the following influenza activity was reported: 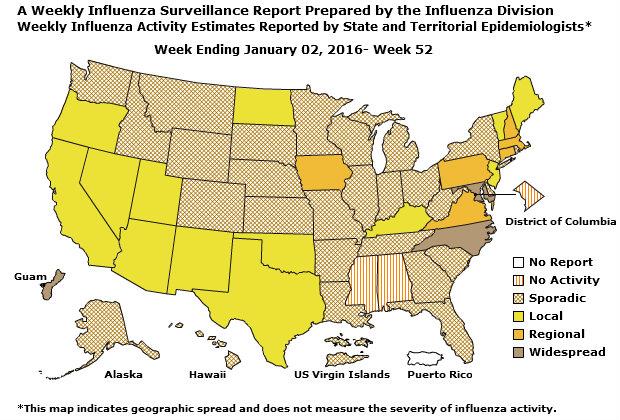