One human infection with a novel influenza A virus was reported by the state of Minnesota. The person was infected with an influenza A (H1N1) variant (H1N1v) virus. The patient was not hospitalized and has fully recovered from their illness. The patient lived and worked in an area near where swine were housed but no direct contact with swine was reported in the week prior to illness onset. No ongoing human-to-human transmission has been identified.

Yamagata Lineage [9]: Nine B/Yamagata-lineage viruses were antigenically characterized as B/Phuket/3073/2013-like, which is included as an influenza B component of the 2015-2016 Northern Hemisphere trivalent and quadrivalent influenza vaccines.

Victoria Lineage [7]: Seven B/Victoria-lineage viruses were antigenically characterized as B/Brisbane/60/2008-like, which is included as an influenza B component of the 2015-2016 Northern Hemisphere quadrivalent influenza vaccines.

During week 49, 6.0% of all deaths reported through the 122 Cities Mortality Reporting System were due to P&I. This percentage was below the epidemic threshold of 6.7% for week 49.

Nationwide during week 49, 1.9% of patient visits reported through the U.S. Outpatient Influenza-like Illness Surveillance Network (ILINet) were due to influenza-like illness (ILI). This percentage is below the national baseline of 2.1%.

During week 49, the following ILI activity levels were calculated:

During week 49, the following influenza activity was reported: 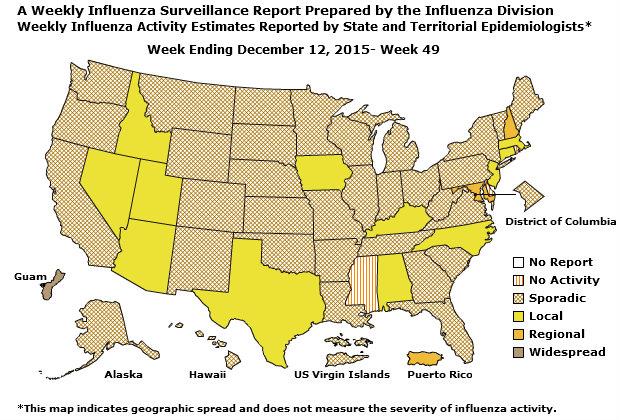