CDC characterizes influenza viruses through one or more tests including genome sequencing, hemagglutination inhibition (HI) and/or neutralization assays. This data is used to compare how similar currently circulating influenza viruses are to the reference viruses used for developing influenza vaccines, and to monitor for changes in circulating influenza viruses. Historically, HI data has been used most commonly to assess the similarity between reference viruses and circulating viruses to suggest how well the vaccine may work until such time as vaccine effectiveness estimates are available. During the 2014–2015 season and to date, however, a portion of influenza A (H3N2) viruses do not yield sufficient hemagglutination titers for antigenic characterization by HI. For many of these viruses, CDC performs genetic characterization to determine the genetic group identity of those viruses. In this way, antigenic properties of these viruses can be inferred from viruses within the same genetic group that have been characterized antigenically.

Yamagata Lineage [44]:All 44 (100%) B/Yamagata-lineage viruses were antigenically characterized as B/Phuket/3073/2013-like, which is included as an influenza B component of the 2015-2016 Northern Hemisphere trivalent and quadrivalent influenza vaccines.

The 18 influenza A (H3N2) viruses collected since October 1, 2015 have been genetically sequenced and all viruses belonged to genetic groups for which a majority of viruses antigenically characterized were similar to A/Switzerland/9715293/2013, the influenza A (H3N2) reference virus propagated in cell culture and representing the 2015-2016 Northern Hemisphere vaccine component. Ten viruses (one A (H1N1)pdm09, eight A (H3N2), and one B/Yamagata-lineage) collected since October 1, 2015 have been antigenically characterized. All ten were similar to the 2015-2016 Northern Hemisphere influenza vaccine components.

Based on NCHS mortality surveillance data available on November 25, 2015, 5.9% of the deaths occurring during the week ending November 7, 2015 (week 44) were due to P&I. This percentage is below the epidemic threshold of 6.7% for week 44.

During week 46, 6.0% of all deaths reported through the 122 Cities Mortality Reporting System were due to P&I. This percentage was below the epidemic threshold of 6.4% for week 46.

Nationwide during week 46, 1.6% of patient visits reported through the U.S. Outpatient Influenza-like Illness Surveillance Network (ILINet) were due to influenza-like illness (ILI). This percentage is below the national baseline of 2.1%.

During week 46, the following ILI activity levels were calculated:

During week 46, the following influenza activity was reported: 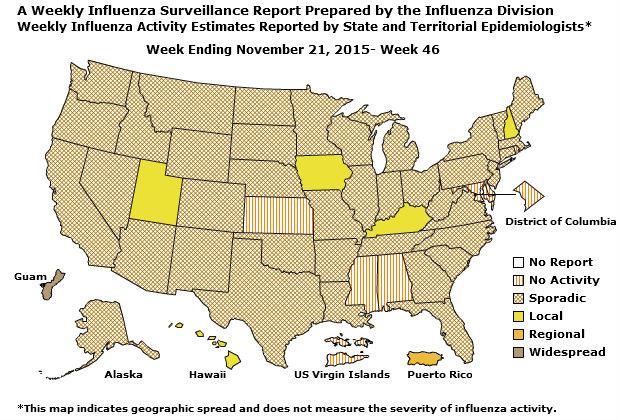