The Centers for Disease Control and Prevention’s (CDC) Influenza Division collects, compiles, and analyzes information on influenza activity year-round in the United States and produces FluView, a weekly influenza surveillance report, and FluView Interactive. The U.S. influenza surveillance system provides information in five categories collected from nine data sources. This is the first report of the 2015-2016 influenza season, which began on October 4, 2015.

The five categories and nine data components of CDC influenza surveillance are:

Yamagata Lineage [38]: All 38 B/Yamagata-lineage viruses were antigenically characterized as B/Phuket/3073/2013-like, which is included as an influenza B component of the 2015-2016 Northern Hemisphere trivalent and quadrivalent influenza vaccines.

Victoria Lineage [24]: All 24 B/Victoria-lineage viruses were antigenically characterized as B/Brisbane/60/2008-like, the virus that is included as an influenza B component of the 2015-2016 Northern Hemisphere quadrivalent influenza vaccine.

No antiviral resistance data is available for specimens collected after October 1, 2015. During May 24-Septemer 30, 2015, 159 specimens (8 influenza A (H1N1)pdm09, 91 influenza A (H3N2), and 60 influenza B viruses) collected in the United States were tested for susceptibility to the neuraminidase inhibitors (oseltamivir, zanamivir, and peramivir). None of the tested viruses were found to be resistant to either oseltamivir, zanamivir, or peramivir.

During week 40, 5.3% of all deaths reported through the 122 Cities Mortality Reporting System were due to P&I. This percentage was below the epidemic threshold of 5.9% for week 40.

No influenza-associated pediatric deaths were reported to CDC during week 40.

Nationwide during week 40, 1.2% of patient visits reported through the U.S. Outpatient Influenza-like Illness Surveillance Network (ILINet) were due to influenza-like illness (ILI). This percentage is below the national baseline of 2.1%.

During week 40, the following ILI activity levels were calculated:

During week 40, the following influenza activity was reported: 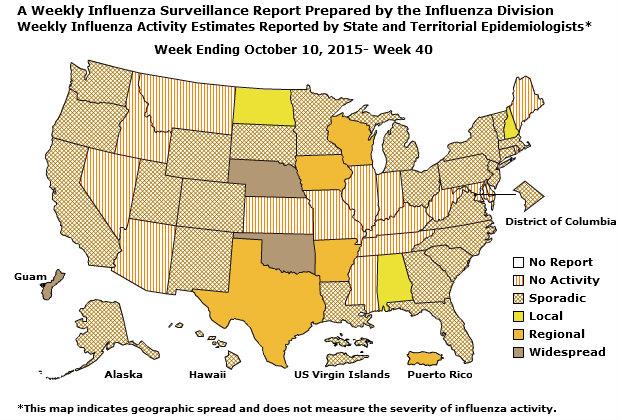