The World Health Organization (WHO) has recommended vaccine viruses for the 2016-2017 influenza season Northern Hemisphere vaccine composition, and the Food and Drug Administration’s Vaccines and Related Biological Products Advisory Committee (VRBPAC) has made the vaccine composition recommendation to be used in the United States. Both agencies recommend that trivalent vaccines contain an A/California/7/2009 (H1N1)pdm09-like virus, an A/Hong Kong/4801/2014 (H3N2)-like virus, and a B/Brisbane/60/2008-like (B/Victoria lineage) virus. It is recommended that quadrivalent vaccines, which have two influenza B viruses, contain the viruses recommended for the trivalent vaccines, as well as a B/Phuket/3073/2013-like (B/Yamagata lineage) virus. This represents a change in the influenza A (H3) component and a change in the influenza B lineage included in the trivalent vaccine compared with the composition of the 2015-2016 influenza vaccine. These vaccine recommendations were based on several factors, including global influenza virologic and epidemiologic surveillance, genetic characterization, antigenic characterization, antiviral resistance, and the candidate vaccine viruses that are available for production.

During week 13, 7.4% of all deaths reported through the 122 Cities Mortality Reporting System were due to P&I. This percentage was above the epidemic threshold of 7.1% for week 13.

Nationwide during week 13, 2.4% of patient visits reported through the U.S. Outpatient Influenza-like Illness Surveillance Network (ILINet) were due to influenza-like illness (ILI). This percentage is above the national baseline of 2.1%. (ILI is defined as fever (temperature of 100°F [37.8°C] or greater) and cough and/or sore throat.)

During week 13, the following ILI activity levels were calculated: 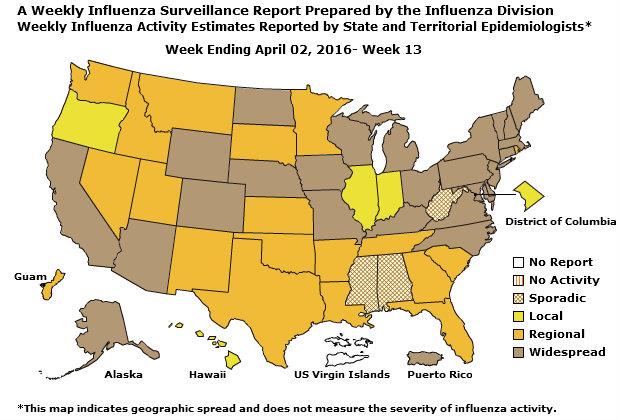