During week 6 (February 7-13, 2016), influenza activity increased in the United States.

Based on NCHS mortality surveillance data available on February 18, 2016, 6.5% of the deaths occurring during the week ending January 30, 2016 (week 4) were due to P&I. This percentage is below the epidemic threshold of 7.6% for week 4.

During week 6, 6.9% of all deaths reported through the 122 Cities Mortality Reporting System were due to P&I. This percentage was below the epidemic threshold of 7.3% for week 6.

Nationwide during week 6, 3.1% of patient visits reported through the U.S. Outpatient Influenza-like Illness Surveillance Network (ILINet) were due to influenza-like illness (ILI). This percentage is above the national baseline of 2.1%. (ILI is defined as fever (temperature of 100°F [37.8°C] or greater) and cough and/or sore throat.)

During week 6, the following ILI activity levels were calculated:

During week 6, the following influenza activity was reported: 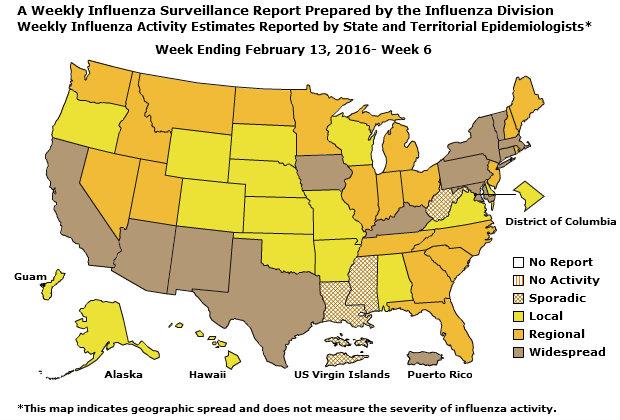