During week 17 (April 26-May 2, 2015), influenza activity continued to decrease in the United States.

One human infection with a novel influenza A virus was reported by the state of Ohio. The person was infected with an influenza A (H1N1) variant (H1N1v) virus and died from complications as a result of the infection. The patient worked at a livestock facility that housed swine but no direct contact with swine was reported in the week prior to illness onset. No ongoing human-to-human transmission has been identified.

Early identification and investigation of human infections with novel influenza A viruses are critical in order to evaluate the extent of the outbreak and possible human-to-human transmission. Additional information on influenza in swine, variant influenza infection in humans, and strategies to interact safely with swine can be found at http://www.cdc.gov/flu/swineflu/index.htm.

During week 17, 6.6% of all deaths reported through the 122 Cities Mortality Reporting System were due to P&I. This percentage was below the epidemic threshold of 6.8% for week 17.

Nationwide during week 17, 1.4% of patient visits reported through the U.S. Outpatient Influenza-like Illness Surveillance Network (ILINet) were due to influenza-like illness (ILI). This percentage is below the national baseline of 2.0%.

During week 17, the following ILI activity levels were calculated:

During week 17, the following influenza activity was reported: 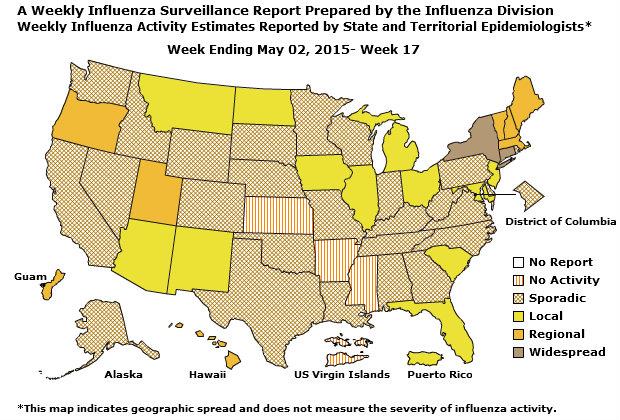