During week 15, 6.7% of all deaths reported through the 122 Cities Mortality Reporting System were due to P&I. This percentage was below the epidemic threshold of 7.0% for week 15.

Three influenza-associated pediatric deaths were reported to CDC during week 15. All three deaths were associated with an influenza B virus and occurred during weeks 11, 14, and 15 (the weeks ending March 21, April 11, and April 18, 2015, respectively).

Nationwide during week 15, 1.4% of patient visits reported through the U.S. Outpatient Influenza-like Illness Surveillance Network (ILINet) were due to influenza-like illness (ILI). This percentage is below the national baseline of 2.0%.

During week 15, the following ILI activity levels were calculated:

During week 15, the following influenza activity was reported: 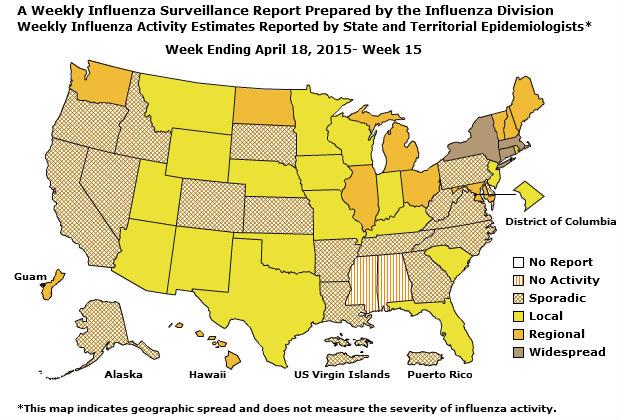