During week 26 (June 28-July 4, 2009), influenza activity decreased in the United States, however, there were still higher levels of influenza-like illness than is normal for this time of year.

Influenza B viruses currently circulating can be divided into two distinct lineages represented by the B/Yamagata/16/88 and B/Victoria/02/87 viruses. Sixty-seven influenza B viruses tested belong to the B/Yamagata lineage and are related to the vaccine strain (B/Florida/04/2006). The remaining 496 viruses belong to the B/Victoria lineage and are not related to the vaccine strain.

During week 26, 6.6% of all deaths reported through the 122-Cities Mortality Reporting System were due to P&I. This percentage was equal to the epidemic threshold of 6.6% for week 26.

Five influenza-associated pediatric deaths were reported to CDC during week 26 (Arizona, New Jersey, New York, and New York City [2]). All five deaths were associated with novel influenza A (H1N1) virus infection. The deaths reported this week occurred during weeks 22-26 (the weeks ending June 6  July 4, 2009). Since September 28, 2008, CDC has received 89 reports of influenza-associated pediatric deaths that occurred during the current influenza season, 22 of which were due to novel influenza A (H1N1) virus infections.

Of the 39 children who had specimens collected for bacterial culture from normally sterile sites, 15 (38.5%) were positive; Staphylococcus aureus was identified in nine (60.0%) of the 15 children. Four of the S. aureus isolates were sensitive to methicillin and five were methicillin resistant. Thirteen (86.7%) of the 15 children with bacterial coinfections were five years of age or older and 10 (66.7%) of the 15 children were 12 years of age or older. Seven of the 22 children with confirmed novel influenza A (H1N1) infection had a specimen collected from a normally sterile site; one of the seven children had a positive bacterial culture. An increase in the number of influenza-associated pediatric deaths with bacterial coinfections was first recognized during the 2006-07 influenza season. In January 2008, interim testing and reporting recommendations were released regarding influenza and bacterial coinfections in children and are available at (http://www2a.cdc.gov/HAN/ArchiveSys/ViewMsgV.asp?AlertNum=00268).

During October 12, 2008 to June 27, 2009, the preliminary laboratory-confirmed influenza-associated hospitalization rate for children 0-4 years old in the NVSN was 4.42 per 10,000. Because of case identification methods utilized in this study, there is a delay from the date of hospitalization to the date of report.

During April 15, 2009 to July 4, 2009, the following preliminary laboratory-confirmed overall influenza associated hospitalization rates were reported by the EIP (rates include type A, type B, and novel H1N1):

Nationwide during week 26, 1.5% of patient visits reported through the U.S. Outpatient Influenza-like Illness Surveillance Network (ILINet) were due to influenza-like illness (ILI). This percentage is below the national baseline of 2.4%.


On a regional level, the percentage of outpatient visits for ILI ranged from 0.3% to 3.2%. All 10 regions reported percentages of visits for ILI below their respective region-specific baselines. ILI decreased during week 26 in seven of 10 regions compared to week 25.

During week 26, the following influenza activity was reported: 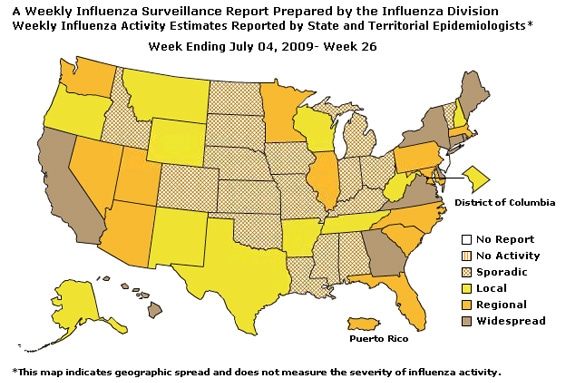