Note: The COVID-19 pandemic is affecting healthcare seeking behavior. The number of persons and their reasons for seeking care in the outpatient and ED settings is changing. These changes impact data from ILINet in ways that are difficult to differentiate from changes in illness levels, therefore ILINet data should be interpreted with caution.

The percentage of respiratory specimens testing positive for influenza at clinical laboratories decreased from 7.3% last week to 2.1% this week.

Genetic and antigenic characterization and antiviral susceptibility of influenza viruses collected in the U.S. are summarized in this report.

Visits to health care providers for influenza-like illness (ILI) decreased from 6.3% last week to 5.4% this week. All regions are above their baselines. 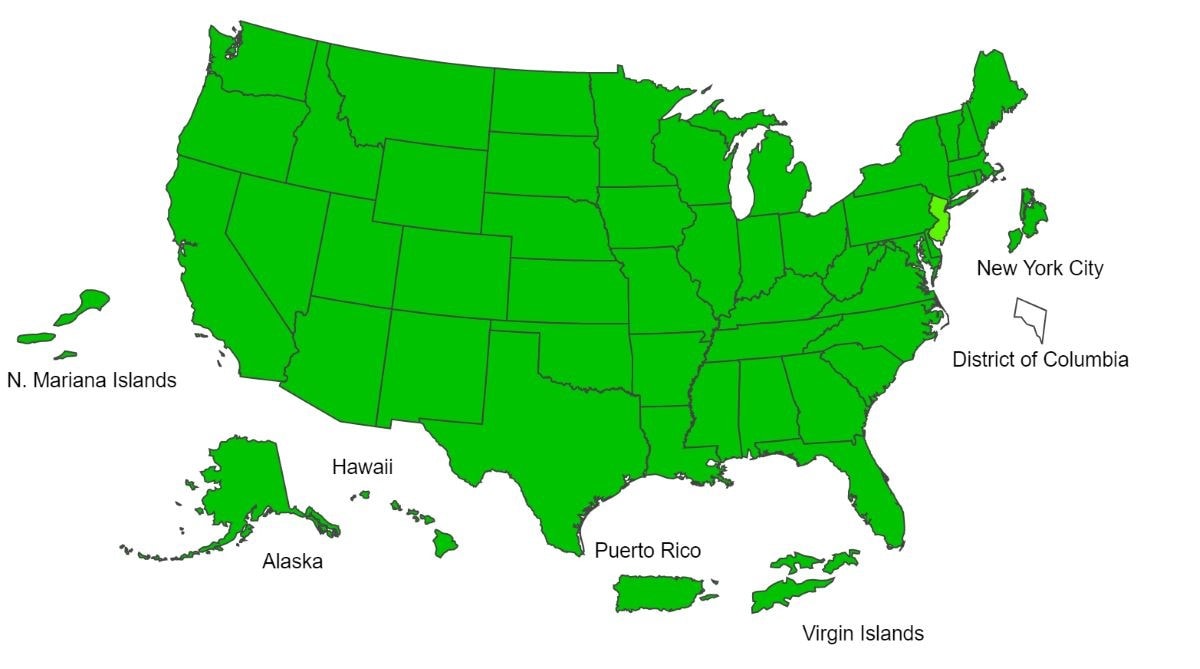 The number of jurisdictions experiencing high ILI activity decreased from 37 last week to 31 this week.

The number of jurisdictions reporting regional or widespread influenza activity decreased from 49 last week to 41 this week.

The overall cumulative hospitalization rate for the season increased to 67.9 per 100,000.

The percentage of deaths attributed to pneumonia and influenza is 8.2%, above the epidemic threshold of 7.2%.

7 influenza-associated pediatric deaths occurring during the 2019-2020 season were reported this week. The total for the season is 162.

A description of the CDC influenza surveillance system, including methodology and detailed descriptions of each data component is available on the surveillance methods page.

Additional information on the current and previous influenza seasons for each surveillance component are available on FluView Interactive.

While influenza B/Victoria viruses predominated earlier in the season, during recent weeks, influenza A(H1N1)pdm09 viruses have been reported more frequently than B/Victoria viruses nationally and in all surveillance regions. For the season, A(H1N1)pdm09 viruses are the predominant virus nationally. Regional and state level data about circulating influenza viruses can be found on FluView Interactive.

CDC antigenically characterizes a subset of influenza viruses by hemagglutination inhibition (HI) or neutralization based Focus Reduction assays (FRA). Antigenic drift is evaluated by comparing antigenic properties of cell-propagated reference viruses representing currently recommended vaccine components with those of cell-propagated circulating viruses. CDC antigenically characterized 521 influenza viruses collected in the United States from September 29, 2019, to March 28, 2020. These data are not used to make calculations about vaccine effectiveness (VE). CDC conducts VE studies each year to measure the benefits of flu vaccines in people.


CDC also assesses susceptibility of influenza viruses to the antiviral medications including the neuraminidase inhibitors (oseltamivir, zanamivir, and peramivir) and the PA endonuclease inhibitor baloxavir using next generation sequence analysis supplemented by laboratory assays. Viruses collected in the United States since September 29, 2019, were tested for antiviral susceptibility as follows:


A total of 556 additional viruses (211 A(H1N1)pdm09, 32 A(H3N2), and 313 B) collected in Alabama, Alaska, Florida, Illinois, Iowa, Louisiana, Massachusetts, Michigan, Nevada, New York, North Carolina, Pennsylvania, South Dakota, Virginia and Wisconsin were analyzed for resistance to neuraminidase inhibitors by pyrosequencing assay. Three (1.4%) of the 211 A(H1N1)pdm09 viruses tested had the H275Y amino acid substitution in the neuraminidase and showed highly reduced inhibition by oseltamivir and peramivir. No molecular markers associated with reduced or highly reduced inhibition by neuraminidase inhibitors were detected in A(H3N2) and type B viruses tested.

Nationwide during week 13, 5.4% of patient visits reported through the U.S. Outpatient Influenza-like Illness Surveillance Network (ILINet) were due to influenza-like illness (ILI). This percentage is above the national baseline of 2.4%.

Data collected in ILINet are used to produce a measure of ILI activity* by state.

During week 13, the following ILI activity levels were experienced:

*Data collected in ILINet may disproportionally represent certain populations within a state, and therefore, may not accurately depict the full picture of influenza activity for the whole state. Differences in the data presented here by CDC and independently by some state health departments likely represent differing levels of data completeness with data presented by the state likely being the more complete.

The overall cumulative hospitalization rate was 67.9 per 100,000 population, which is higher than all recent seasons at this time of year except for the 2017-18 season. Rates in children 0-4 years old and adults 18-49 years old are now the highest CDC has on record for these age groups, surpassing the rate reported during the 2009 H1N1 pandemic. Hospitalization rates for school-aged children are higher than any recent regular season but lower than rates during the pandemic.

The highest rate of hospitalization is among adults aged ≥ 65, followed by children aged 0-4 years and adults aged 50-64 years.

Based on National Center for Health Statistics (NCHS) mortality surveillance data available on March 26, 2020, 8.2% of the deaths occurring during the week ending March 21, 2020 (week 12) were due to P&I. This percentage is above the epidemic threshold of 7.2% for week 12.

Of the 162 influenza-associated pediatric deaths occurring during the 2019-2020 season and reported to CDC:


FluView Interactive: FluView includes enhanced web-based interactive applications that can provide dynamic visuals of the influenza data collected and analyzed by CDC. These FluView Interactive applications allow people to create customized, visual interpretations of influenza data, as well as make comparisons across flu seasons, regions, age groups and a variety of other demographics. To access these tools, visit http://www.cdc.gov/flu/weekly/fluviewinteractive.htm

National Institute for Occupational Safety and Health: Monthly surveillance data on the prevalence of health-related workplace absenteeism among full-time workers in the United States are available from NIOSH at https://www.cdc.gov/niosh/topics/absences/default.html