The first case of human infection with swine origin influenza A (H3) in Pennsylvania was reported in an MMWR early release issued on Friday, September 2, 2011 and occurred in a girl younger than 5 years. The two cases confirmed over the weekend also occurred in girls, both younger than 10 years. All three of the patients were in the area where swine were exhibited and one had direct contact with swine.

“It′s pretty rare to see human infections with swine flu viruses. CDC gets reports of about 5 cases of human infections with swine flu viruses each year,” says Lyn Finelli, Chief Outbreak Investigator for CDC′s Influenza Division. “Most of the time, these cases occur after close contact with pigs and seldom spread onward from the first person infected.” There have been rare cases where human-to-human transmission may have occurred, most recently in Indiana in a case also reported in the September 2, 2011 MMWR early release. “The hallmark of influenza viruses is their ability to change,” cautions Mike Shaw, the Influenza Division′s Associate Director for Laboratory Science. “That is why we watch these types of situations closely, to make sure that the virus hasn′t changed to allow efficient and sustained human-to-human transmission.”

The investigation in Pennsylvania is continuing in order to determine if more people are sick or if there is ongoing spread of this virus in the community. A number of CDC staff are in Pennsylvania assisting the Department of Health in the investigation. “Fortunately,” Finelli says, “it does not look like there is current spread in the community and so far, illness associated with these viruses has not been especially severe. Two of the patients are fully recovered and the third is recovering.”

While there is not a vaccine to protect humans against these swine origin influenza A (H3) viruses, there are two FDA-cleared drugs that can treat infection with these viruses. The antiviral drugs oseltamivir and zanamivir – which are used to treat infection with human seasonal viruses — also show activity against these viruses. “That is one of the messages we wanted to get out to clinicians, “Finelli says. “If they see influenza like illness and suspect influenza and there is a history of swine exposure, clinicians should consider treating their patients with influenza antiviral medications, even before they get a positive influenza test result. This is especially true if there is little seasonal influenza activity, which is the case in most of the United States at this time.” 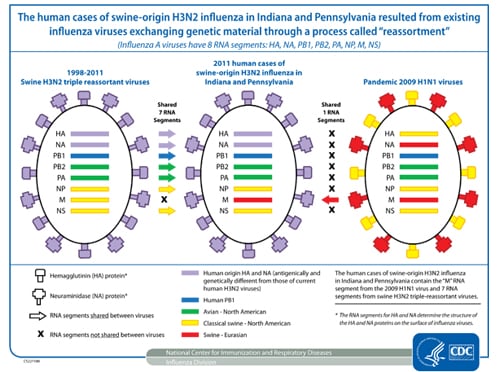 The virus in the center of the picture represents the human cases of swine-origin H3N2 influenza in Indiana and Pennsylvania. Seven of these viruses’ eight RNA segments are derived from influenza viruses that commonly circulate in pigs. The virus on the left of the diagram, labeled “1998-2011 swine H3N2 triple reassortant viruses,” represents these swine influenza viruses. These swine viruses are called triple reassortant viruses because they contain genetic material from humans, pigs and birds.

Arrows between the left virus and center virus in the diagram show which seven of the eight RNA segments found in H3N2 triple-reassortant swine influenza viruses (represented by the left virus) are shared with the human cases of swine-origin H3N2 reported in Indiana and Pennsylvania (center virus).