April 26, 2013 – The number of human infections with avian influenza A (H7N9) in China has risen to 109; with 23 deaths.* There are still no reports of H7N9 in the United States. While there is no evidence of sustained human-to-human spread of this virus, CDC is taking routine pandemic preparedness measures to prepare for that possibility. This update contains information on CDC laboratory activities to date, an update on the H7N9 outbreak in China and background information on RT-PCR tests.

CDC Activities to Date Include:

Growing and Sharing the Virus

The first H7N9 virus isolate from China was received by CDC on Thursday, April 11, 2013. The virus was immediately inoculated into hundreds of eggs to grow more of the virus. The virus replicated well in eggs – not unusual for an avian influenza virus – and CDC was able to begin packaging vial samples of virus to distribute to other laboratories on Monday April 15, 2013. At this time, CDC has sent H7N9 isolates to 5 laboratories, including the United States Department of Agriculture. Only laboratories with the proper permits can receive the H7N9 virus isolate. 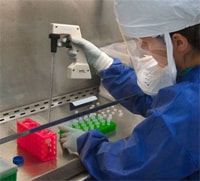 A CDC scientist uses a pipette to transfer H7N9 virus into vials for sharing with partner laboratories for public health research purposes.

Conducting Studies with the Virus

CDC is using the H7N9 virus isolate to learn more about how the virus causes disease and its potential to spread among humans. Studies using cell cultures and animals will provide information about the severity of associated disease, as well as the pathology of the infection (what the virus does to the body either directly or indirectly). Additionally, animals are used to conduct studies on how the virus spreads. So far these studies have confirmed that this virus spreads between animals through close contact, which was expected. Studies to determine whether this virus can be spread in respiratory droplets through the air are ongoing.

Animal studies also allow for the collection of antiserum (antibodies) to these viruses so that the animals’ immune responses to the virus can be examined and other studies on immunity can be performed. Methods to detect immune responses in human serum are under development and will be used to study population immunity to the H7N9 virus. These studies are just getting underway; results are not expected for some time. The antibody tests also will be used to see if the candidate H7 vaccine viruses in development are a good match to the wild virus detected in China.

Creating a Test to Detect This Virus

CDC has completed work on new laboratory diagnostic test materials to identify human infections with the new avian influenza A (H7N9) virus. Influenza diagnostic tests already in use at qualified public health laboratories identify the new H7N9 virus as “unsubtypable” influenza A viruses, but cannot specifically identify the H7N9 subtype. The CDC H7N9 test materials are intended for use with real-time RT-PCR (reverse-transcriptase polymerase chain reaction), a highly accurate and sensitive laboratory test for detecting and identifying flu viruses in respiratory specimens by type and subtype. Providing this test to qualified public health laboratories will allow for more rapid testing of H7N9, though any H7N9-positive samples will continue to be sent to CDC for confirmation. Domestic and international shipping of these diagnostic test materials began this week.

CDC was able to develop the diagnostic test before receiving the H7N9 virus isolate using posted genetic sequences on GISAID. The actual virus isolate was used to confirm the sensitivity and specificity of the test. The test has been authorized for use in the United States under an “Emergency Use Authorization (EUA)external icon,” a regulatory step that allows the Food and Drug Administration (FDA) to swiftly authorize the use of new laboratory diagnostic test kits in the United States. While these tests are being distributed under an EUA, it’s important to note that there is not a public health emergency in the United States. Distribution of diagnostic test kits domestically is a preparedness measure.

CDC reports continued progress in developing an H7N9 candidate vaccine virus that could be used to manufacture H7N9 vaccine should that become necessary.

CDC also has tested the H7N9 virus isolate it received from China to see if it is susceptible to the influenza antiviral drugs oseltamivir/Tamiflu® and zanamivir/Relenza®. Laboratory testing at CDC indicates that this first virus isolate received on April 11 is sensitive (susceptible) to these “neuraminidase inhibitors,” (NAIs) the two antiviral drugs now recommended to treat seasonal flu. Testing showed the virus would be resistant to the adamantanes, another class of antiviral drugs that are not currently recommended for use because of widespread resistance.

It’s important to note that influenza viruses can be, or can become, resistant to influenza antiviral drugs, and if this happens, these medications may not be fully effective. The H7N9 virus detected in China is a new virus and there is a lot to learn about its properties. In addition, the virus is still evolving. As new H7N9 virus isolates are received, CDC will conduct testing to determine their susceptibility to existing antiviral drugs. Now, CDC recommends oseltamivir/Tamiflu® and zanamivir/Relenza® for treatment of patients with suspected or confirmed H7N9.

CDC received a request for bilateral assistance from China and a CDC team is in country now supporting the domestic outbreak investigation and response.

Update on H7N9 in China

While some mild illness has been reported in H7N9 patients, most have had very severe illness. China is reportedly treating H7N9 cases and recommending treatment of their symptomatic contacts with oseltamivir.

Since this H7N9 virus is a novel influenza virus with pandemic potential, the source of the human infections and how this virus spreads is being carefully investigated. H7N9 has been detected in Chinese poultry. While the investigation is ongoing, the current working assumption is that most people have been infected with the virus after having contact with infected poultry or contaminated environments. A New England Journal of Medicineexternal icon (NEJM) article authored by Chinese public health officials released on Wednesday, April 24, 2013 reports that 77% of the first 82 H7N9 patients had some animal exposure.

China also is conducting follow-up investigations among close contacts of people infected with H7N9 virus to try to assess whether any human-to-human spread of this virus is occurring. According to the NEJM article, more than 1,200 close contacts of the first 82 H7N9 patients were followed for 7 days to see whether they would develop symptoms. While some people have developed flu-like symptoms, all tested negative for H7N9. However, the NEJM article also reports on two small clusters of cases where human-to-human spread could not be ruled out, but it is possible there may have been other animal exposures in those cases as well. The results of China’s investigations to date suggest that if any human-to-human transmission is taking place, it is very rare and it is not sustained (ongoing). In the past, limited and unsustained human-to-human transmission has been observed with other avian influenza viruses, most notably H5N1. There is no evidence that sustained (ongoing) spread of this virus from person to person is occurring.

Human infections with avian influenza viruses are rare and most often occur after people are in direct or very close contact with an infected bird (either live or dead) or environments contaminated with avian flu virus. The extent of the H7N9 avian outbreak in poultry is still being assessed, but China has reportedly begun culling birds in live markets. Infected birds can shed a lot of flu virus, for example, in their droppings or their mucus. If someone touches an infected bird or an environment contaminated with virus and then touches their eyes, nose or mouth, they may be infected with bird flu virus. There is some evidence that infection may also occur if the flu virus becomes airborne, such as when an infected bird flaps its wings. If someone were to breathe in airborne virus, it’s possible they could get infected.

This situation continues to evolve rapidly and CDC will provide updates are more information becomes available.

Background: How Does rRT-PCR Work? 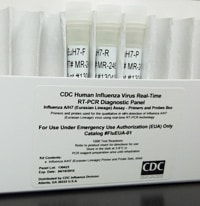 CDC’s H7N9 diagnostic test kit. The kit contains rRT-PCR reagents for use by specialized laboratories to detect human infections with the H7N9 virus.

*Note: On April 24, 2013, Chinese authorities announced they would begin reporting cases of H7N9 on a weekly rather than a daily basis.