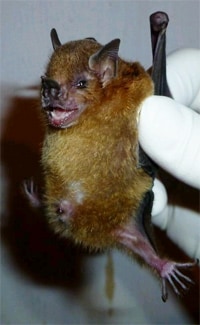 February 9, 2012 — A new and dramatically different influenza A virus has been discovered in fruit bats. The findings by scientists from the Centers for Disease Control and Prevention working with the Universidad del Valle of Guatemala are described in an article published in the Proceedings of the National Academy of Sciences (PNAS) journal March issue.

CDC’s Global Disease Detection Program (GDD) established a regional center in Guatemala and has worked there since 2007 to rapidly respond to emerging infectious disease threats. Bats were targeted for investigation by GDD because they are hosts for many emerging infectious diseases. With the assistance of the GDD Guatemala Regional Center and the University of the Valley’s field team, CDC’s Rabies Program took the lead in swabbing the bats. A total of 316 bats from 21 different species were captured and tested from eight locations in southern Guatemala during 2009 and 2010. (Videos showing how specimens are collected from bats in Guatemala are available hereexternal icon and hereexternal icon.) The extent to which influenza viruses are circulating in bat populations remains unknown. Additional studies are being conducted to better understand how common influenza viruses are in bats from Central American and other regions. This species of bats is not native to the continental United States.

“These collaborations are fantastic opportunities to contribute to scientific development but also to strengthen capacities in countries like Guatemala where populations strive daily with basic needs,” said Celia Cordón de Rosales, director of the Universidad del Valle’s Center for Health Studies.”

CDC and disease experts around the world monitor influenza viruses that circulate in animals because the previous pandemics of the 20th century as well as the 2009 H1N1 pandemic were caused by influenza viruses in animals that gained the ability to infect and spread easily in humans.

The journal articleexternal icon is available online here. For more information about CDC’s global disease detection and emergency response activities, please see Global Disease Detection (GDD). Influenza related information, including influenza in animals, is available at the CDC Seasonal Flu website. For more information on bat influenza and how it is different from other influenza viruses, please see Bat Influenza Questions and Answers.