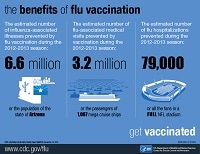 During National Influenza Vaccination Week, CDC Urges As Yet Unvaccinated Americans to Get A Flu Vaccine

December 12, 2013 — A new report released by the Centers for Disease Control and Prevention (CDC) today during National Influenza Vaccination Week (NIVW) highlights the benefits flu vaccine can provide, estimating conservatively that influenza vaccination prevented 79,000 hospitalizations and 6.6 million illnesses last season. The report also underscores how severe flu can be; it includes an estimate that 381,000 Americans were hospitalized from the flu last season. Despite the benefits of vaccination and the potential severity of the flu, CDC also announced that fewer than half of Americans have gotten vaccinated so far this season. The agency hopes this information will encourage people who are still unvaccinated to get their vaccine before the 2013-2014 flu season takes off.

These are the greatest benefits from vaccination estimated by using this model when looking back retroactively as far as 2005-2006. These high numbers are largely attributable to the severity of the season. This is because vaccination prevents more illnesses during seasons with high intensity and less during seasons of lower intensity since fewer influenza cases can be prevented when the underlying amount of disease is low.

The report concludes that while vaccination produced a substantial reduction in influenza-associated illness last season, there are additional benefits that could be realized through increased vaccination coverage and improvements in the effectiveness of existing vaccines. The MMWR report estimates that if vaccination levels had reached the Healthy People 2020 target of 70%, approximately 4.4 million additional illnesses, 1.8 million additional medically attended illnesses, and 30,000 additional hospitalizations might have been prevented.

The estimates released by CDC today are one example of ongoing efforts across the agency to better measure the impact of public health interventions. CDC will continue to refine the methodology for estimating the impact of influenza vaccine as an active, ongoing research agenda continues to inform the process. There is information suggesting that current estimates on the number of hospitalizations that occur annually are low. Further refinements in the model may change estimates in the future.

CDC released this information in concert with NIVW, a national observance taking place from December 8-14, 2013. Past flu vaccination coverage estimates have shown flu vaccination activity drops quickly after the end of November. NIVW was established by CDC in 2005 to underscore the importance of continuing flu vaccination through the holiday season and beyond.

Since 2010, CDC and the Advisory Committee on Immunization Practices (ACIP) have recommended everyone 6 months and older with rare exception get a yearly flu vaccination. Vaccination is especially important for people who are at high risk of serious flu-related complications, including young children and people 65 and older, pregnant women, and people with certain chronic medical conditions, like asthma, diabetes and heart disease. CDC also recommends that health care providers get vaccinated annually.

CDC recommends that providers continue to provide flu vaccinations throughout the flu season, which can last as late as May. Today, the agency stressed the importance of ongoing vaccination efforts to increase vaccination coverage, particularly in groups that are lagging in their coverage levels, and noted the importance of a clinician recommendation and offer for vaccination as a motivating factor for people to get vaccinated.

While the MMWR report focused more on the preventive benefits provided by vaccination, an important underlying message of this report is the high burden of illness flu can cause. While flu seasons vary in intensity, last season was characterized as moderately severe overall, but was severe for seniors. The MMWR report indicates that an estimated 381,000 hospitalizations occurred during 2012-2013. This is the highest estimate for the number of flu-associated hospitalizations for a single flu season derived using this model, including during the 2009-2010 season, when 290,000 hospitalizations are estimated to have occurred during that first season of the H1N1 pandemic.

Other markers for severity were elevated last season as well. For example, CDC recorded the highest number of reported influenza-associated deaths among children (169) in a non-pandemic season since this type of reporting began in 2004. Estimates for illnesses and medically attended illnesses during 2012-2013 in this report were elevated as well, but well under the numbers seen during 2009-2010, when an estimated 52 million influenza illnesses and 24 million medically attended illnesses occurred. During 2009-2010, hospitalization rates were highest among children 6 months to 7 years of age (71.7/100,000).

The CDC MMWR report concludes with a reminder that while the timing of influenza activity is unpredictable, peak weeks of flu activity have occurred in January through March during 90% of the past 20 seasons. The latest FluView surveillance report indicates that flu season is just starting. For the millions of American who have not yet been vaccinated this season, that means there is still time to be protected against the flu this season. There are several flu vaccine options for the 2013-2014 flu season. Use the Healthmap Vaccine Finderexternal icon to find a flu vaccine location near you.