The most recent estimates on the impact of annual influenza vaccination and the burden of influenza in the United States are available here. Note that estimates on this page may have been updated subsequently.

December 10, 2015 — As the Centers for Disease Control and Prevention (CDC) marks the 10th National Influenza Vaccination Week (NIVW), the agency today released several reports on flu, including vaccine coverage estimates and a flu activity update for this season. Only 39% of people in the United States reported having gotten a flu vaccine this season as of November 5, 2015, however, flu season is just starting, making now a good time to get vaccinated. CDC also released final estimates on the burden of flu illness and the burden of flu averted by vaccination last season. NIVW is a national observance designed to support ongoing flu vaccination into the holidays and beyond.

The low interim influenza vaccine coverage estimates released today are similar to those for the same time last year and indicate that overall three out of five persons in the United States reported not having gotten their flu vaccination as of early November. Vaccine uptake estimates vary by age. Older people (65 years and up) and young children (6 months to 4 years) are most likely to have been vaccinated with uptake estimates of 60% and 52% respectively. Older children (13 through 17 years old) were the least likely to have been vaccinated with uptake estimates of 27%. Similarly, only 34 percent of adults 18 to 64 years old reported having been vaccinated. Estimated vaccination uptake among pregnant women (40%) also is similar to this time last season.

Forgoing vaccination leaves people vulnerable to getting flu and spreading it to other people, including people who are at high risk of serious flu illness like pregnant women, older people, and people with certain chronic health conditions like asthma or diabetes.

The overall vaccination rate among health care providers (HCP) was 67%, which also is similar to estimates from last season. Among health care providers, high vaccination rates persist among physicians (88%), nurse practitioners/physician assistants (82%), nurses (77%), pharmacists (77%), and other clinical personnel (73%). Flu vaccination uptake remained lowest among assistants or aides (55%) and administrative/non-clinical support staff (63%). By workplace, coverage estimates were highest among HCP working in hospitals (84%) and lowest among HCP working in long-term care facilities (52%). The majority (74%) of surveyed assistants and aides work in long-term care facilities, which are less likely to require or offer vaccination to employees than any other health care setting. CDC recommends that all health care workers get vaccinated to protect themselves and their patients from flu. The numbers above highlight the importance of ongoing efforts to increase vaccination coverage, particularly in long-term care facilities.

Past flu vaccine coverage estimates have shown that the numbers of people getting flu vaccination drops after November, but influenza activity most often peaks in February and significant circulation of flu viruses can occur as late as May. Continued efforts are needed to increase vaccination, including vaccination into the holidays and beyond, in order to increase the number of people protected from flu. Very little flu activity has occurred so far this season, but activity is expected to increase in the coming weeks. That means that vaccination now is still a good idea. Data shows that people are much more likely to get vaccinated if it is recommended by their health care provider so it is important that physicians and other medical professionals continue to recommend and offer vaccine to their patients.

Flu is unpredictable and every season is different. So far this season, while activity remains low, H3N2 viruses have been most common, with some influenza H1N1 and B viruses also being detected. Last season, drifted H3N2 viruses resulted in reduced vaccine effectiveness (VE) of 23% overall. The impact of this reduced VE is reflected in CDC’s estimates released online today of the number of flu-related illnesses, medical visits and hospitalizations during the 2014-2015 season. CDC estimated that 40 million flu-associated illnesses, 19 million flu-associated medical visits and 970,000 flu-associated hospitalizations occurred last season. However, even though the vaccine worked less well last season, the report estimates that flu vaccination still prevented 1.9 million flu illnesses, 966,000 flu-associated medical visits and almost 67,000 flu-associated hospitalizations. This represents a 6.5% reduction in the burden of disease. Previously, when better vaccine effectiveness has been observed, this has translated into reductions in the burden of disease of about 20%.

These estimates on the burden of flu and the burden averted by vaccination are derived from a model first published in PlosOne in 2013external icon which uses season-specific data on vaccine coverage, vaccine effectiveness and adjusted hospitalization rates from FluSurv-NET to calculate the overall burden of disease and the burden of disease averted by flu vaccination. When this model is applied retroactively to the 2010-2011 through 2012-2013 seasons, flu-associated hospitalizations are estimated to have ranged from 121,000 to 611,000. The estimate for last season (970,000) would represent a new high end of the range.

An earlier model developed by CDC using a different method estimated the number of flu-associated hospitalizations during the 1990s and found that they ranged from158,000 (during 1990-1991) to 431,000 (during 1997-1998), with a frequently-cited average of more than 200,000 hospitalizations per year. Some of the difference between the more recent estimates and those from the 1990s may result from a growing U.S. population with the greatest increases occurring in older age groups. An aging population means that more people are vulnerable to developing severe complications from seasonal influenza. CDC is continuing to refine and validate the newer model.

Burden of Flu on Older People

Other data recorded during 2014-2015, including reported influenza-like illness, numbers of laboratory-confirmed flu cases and influenza-coded deaths, confirm that people 65 and older bore a greater than usual burden from flu last season, even though they had the highest vaccination rates (final end of season estimate of 67% during 2014-2015). The burden of disease on people 65 and older underscores not just the importance of vaccination for people in that age group, but also the need for better vaccines. If the vaccine effectiveness last season had been similar to what has been observed previously against H3N2 viruses (36%) this would have translated into the prevention of 7.4 million flu cases, 3.6 million medical visits and about 200,000 flu hospitalizations, more than three times the estimated numbers of illnesses, doctor’s visits and hospitalizations averted with the actual VE from last season. Most of the benefits realized would have occurred among older people.

The 2014-2015 estimates also highlight the unrealized benefits of vaccination in unvaccinated or under-vaccinated populations. People 18 to 64 years account for more than half of the U.S. population but have the lowest vaccination rates (33% during 2014-2015). Collectively, they experienced an estimated 22 million flu illnesses, nearly 9 million flu medical visits and about 175,000 flu-associated hospitalizations last season. Even with reduced VE last season, higher vaccination rates in that age group – as well as other age groups – could have prevented more flu illnesses and severe outcomes.

NIVW was established by CDC and its partners in 2005 to underscore the importance of continuing flu vaccination throughout the flu season. 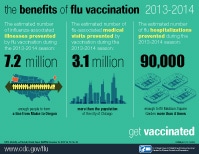