CDC continues to urge vaccination and rapid treatment with antiviral drugs for people at high risk of serious flu complications including pregnant women, people who are morbidly obese and people with metabolic disorders

January 17, 2014 – H1N1 flu continues to cause a lot of illness across the country and flu-related hospitalization and death indicators are up this week from last, according to CDC’s latest FluView report. The estimated proportion of flu- and pneumonia-related deaths is now above the epidemic threshold for the first time this season; this means that more pneumonia and influenza deaths are occurring than expected for this time of year. Additionally, the number of pediatric deaths reported to CDC this season doubled this week from 10 to 20. More than 60 percent of hospitalizations continue to occur in people between the ages of 18 and 64: while this is a somewhat unusual pattern for seasonal flu, a similar age distribution for hospitalizations was seen during the 2009 H1N1 pandemic. The pandemic was the last time that H1N1 viruses were the predominant circulating flu virus. Taken together, these indicators underscore the impact that seasonal flu is having on the United States, particularly on younger people.

CDC continues to recommend that people who have not gotten vaccinated yet this season get vaccinated now. While activity may be declining in states where the season began earlier, nationally the country is likely to experience several more weeks of high flu activity as flu spreads to other states. The number of states reporting high influenza-like-illness fell from 20 to 14 this week, but the number of states reporting widespread flu activity increased from 36 to 40.

CDC also is reminding clinicians and members of the public at high risk for serious flu complications about the importance of rapid antiviral treatment. Influenza antiviral drugs are a second line of defense against the flu; prompt treatment can reduce serious illness and death. These drugs work best when started soon after influenza symptoms begin (within 2 days), but persons with high-risk conditions can benefit even when antiviral treatment is started after the first two days of illness. 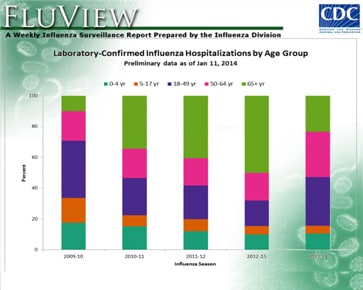 This chart shows the proportion of people hospitalized from flu by age group. Note the greater numbers of people 18-64 hospitalized during the current season and the similarity with the pattern seen during 2009-2010.

This season’s pattern of more hospitalizations across younger age groups is likely due to existing levels of immunity to this virus across the population. Serology studies during the pandemic suggested that people 65 years or older had existing antibodies against H1N1 viruses, perhaps because they were exposed to similar viruses – predecessors of 2009 H1N1 viruses – earlier in their lifetimes.

The 2009 H1N1 virus is estimated to have caused 60.8 millionexternal icon illnesses among the more than 300,000,000 people in the United States over the course of the pandemic. So while some young people likely developed antibodies for H1N1, many probably did not.

Only about 40 percent of the people in the United States get vaccinated each year and how well the vaccine works can vary. Additionally, younger adults – especially those who are otherwise healthy – are less likely to get vaccinated. When you combine the numbers of people who have not previously been infected with H1N1, the number of people who do not get vaccinated and the more elusive question of waning immunity post-infection or post-vaccination, it’s clear that many people in this country would still be susceptible to H1N1 infection.

Of the 20 pediatric deaths this week, 17 were eligible to receive flu vaccine. Of the 15 children who were eligible for vaccination and for whom CDC had a vaccination history, only one was fully vaccinated against influenza. These deaths are a somber reminder of the danger flu poses to children. The single best way to protect children against seasonal flu and its potential severe consequences is to vaccinate them. Among children, vaccination is especially important for those younger than 5 years of age and those of any age with an underlying medical condition like asthma; a neurological, neuromuscular or neurodevelopmental disorder; or immune suppression. These children are at higher risk of serious complications if they get the flu. But it’s important to remember that even otherwise healthy children can become seriously ill if they get the flu. Laboratory-confirmed influenza hospitalization data reported during the 2012-2013 flu season indicated that approximately 46% of children hospitalized with the flu had no identified underlying medical conditions.

Other people at high risk for serious flu complications include: those with underlying chronic medical conditions such as asthma, diabetes, heart disease, morbid obesity, and neurological conditions; pregnant women; those younger than 5 years or older than 65 years of age; and anyone with a weakened immune system. A full list of high risk factors is available at People at High Risk of Developing Flu–Related Complications.