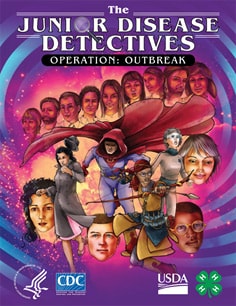 August 17, 2018  ̶  Today, the Centers for Disease Control and Prevention (CDC) released new educational materials for use in kindergarten through grade 12 (K-12) classrooms across the country in association with the CDC’s new graphic novel, “The Junior Disease Detectives: Operation Outbreak.” The graphic novel is intended to raise youth awareness of variant flu, which is caused by a kind of flu virus that spreads from pigs to people pdf icon[1.2 MB, 2 pages], and to educate children and teens about careers in public health and outbreak investigations. The release of these new education materials today coincides with the report of four new variant virus infections in three states.

The first classroom activity released today for use with the graphic novel is called the “Operation Outbreak Team,” and it is intended to teach students about the various roles and responsibilities of the professionals involved in an infectious disease outbreak response. CDC also released an “Educational Overview” as an educational resource for teachers and students, and it describes the learning objectives associated with the graphic novel. The activities highlight themes in the graphic novel to help teach youth about public health science, epidemiology, biology, outbreak investigations and associated career skills. The development and release of new classroom activities is planned throughout the 2018-2019 school year.

The graphic novel and its associated educational content is available for free download from the CDC flu website at www.cdc.gov/flu/graphicnovel and the Apple iTunes storeexternal icon. The novel follows a group of teenage 4-H members who participate in a state agricultural fair and later attend CDC’s Disease Detective Camp in Atlanta. When one of the boys becomes sick following the fair, the rest of the group use their newly-acquired disease detective knowledge to help a team of public and animal health experts solve the mystery of how their friend became sick. The graphic novel was developed at CDC and illustrated by Bob Hobbs, the artist previously responsible for CDC’s Zombie Pandemic novella. The graphic novel was developed in collaboration with the U.S. Department of Agriculture (USDA) and 4-H, the youth development organization affiliated with USDA. The graphic novel launched on Friday, August 10, as announced through a CDC press release.

CDC collaborated with teachers participating in its Science Ambassador Fellowship to develop the educational activities that accompany the graphic novel for use in middle and high school science, technology, engineering and mathematics (STEM) classrooms across the country. This spring, the CDC Science Ambassador Fellowship piloted the first activity with over 120 middle and high school STEM teachers. 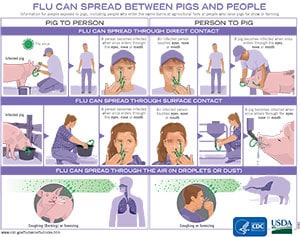 The Science Ambassador Fellowship connects highly trained teachers with CDC scientists to create unique, scientifically accurate educational materials that are relevant to today’s students and made available to teachers nationwide. The fellowship supports the needs of teachers who educate youth and guide their career exploration. The Science Ambassador Fellowship hopes these activities expand the opportunities for more STEM educators to teach public health science, and motivate students to become tomorrow’s disease detectives.”

The graphic novel and its associated curriculum is part of a broader CDC initiative with USDA and other agricultural partners to raise awareness, knowledge and understanding of a One Health approach to zoonotic disease prevention and response. A One Health approach recognizes that the health of people is connected to the health of animals and the environment. It is a collaborative, multisectoral, and trans-disciplinary approach — working at the local, regional, national, and global levels — with the goal of achieving optimal health outcomes recognizing the interconnection between people, animals, plants, and their shared environment. CDC works closely with USDA and other partners using a One Health approach to recommend practices that reduce the risks of diseases spreading between animals and people. 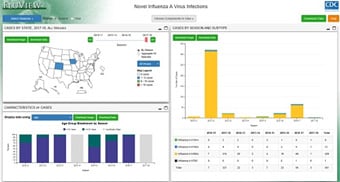 Variant influenza case counts and related data and visuals are available via FluView Interactive. (Click the display “year” box at the top of the page to sort data by year.)

One public health focus of the graphic novel has been to raise awareness of variant flu, which is a term used to describe human infections with influenza viruses that normally circulate in swine.  Variant flu infections in people are rare, but can sometimes lead to serious illness, including hospitalization and death.  Most variant flu infections occur in children exposed to infected pigs or their environments in agricultural fair settings. The novel serves as a new platform to reach youth audiences, who might otherwise not receive CDC’s guidance and recommendations on preventing such infections. During 2017, 67 variant virus infections were reported in the United States, six of which resulted in hospitalization. Two of these hospitalizations involved children who were admitted into an intensive care unit (ICU).