January 8, 2014 – Canada has reported the first case of human infection with avian influenza A (H5N1) virus ever detected in the Americas. The case occurred in a traveler who had recently returned from China. H5N1 virus infections are rare and these viruses do not spread easily from person to person. Most of the 648 human cases of H5N1 infections that have been detected since 2003 have occurred in people with direct or close contact with poultry. The Centers for Disease Control and Prevention (CDC) considers that the health risk to people in the Americas posed by the detection of this one case is very low. CDC is not recommending that the public take any special actions regarding H5N1 virus in response to this case. For people traveling to China, CDC recommends that people take the same protective actions against H5N1 as recommended to protect against H7N9 or other avian influenza A viruses. This information is available on the CDC website at Travelers Health: Avian Flu (Bird Flu).

According to Canadian health officials, the patient, who died on January 3, 2014, recently traveled to Beijing, China, where avian influenza A H5N1 is endemic among poultry. This is the first detected case of human infection with avian influenza A H5N1 virus in North or South America. It also is the first case of H5N1 infection ever imported by a traveler into a country where this virus is not present in poultry. No such H5N1 viruses have been detected in people or in animals in the United States.

While the current risk from H5N1 viruses is very low and CDC believes it unlikely that cases of H5N1 have occurred in the United States, CDC will send out a reminder to clinicians in this country about when and how to test for H5N1 infection. The recommendations for testing for H5N1 are similar to those for H7N9 and include recent travel (within 10 days) to a country with H5N1 virus infections in birds or people. The guidance for H7N9 is posted on the CDC website at Human Infections with Novel Influenza A (H7N9) Viruses.

According to CDC, more concerning for Americans right now is seasonal flu, which is widespread in much of the country. The agency urges people who have not gotten their seasonal flu vaccine this season to get vaccinated now. A seasonal vaccine will protect you against seasonal flu viruses.

As mentioned previously, avian influenza A H5N1 is endemic in poultry in China. Since 2003, 45 cases of human infection with H5N1 have been reported in China and 30 (67%) have died. Affected persons have ranged in age from 2 years to 62 years, with an average age of 26 years. Most of the reported cases have had poultry exposure.

The detection of one isolated case of H5N1 virus infection in a returned traveler does not change the current risk assessment for an H5N1 pandemic. A pandemic would only result if the H5N1 virus were to gain the ability to spread efficiently from person-to-person and there is no indication that this has occurred.

CDC is in close contact with Canadian public health partners and has offered laboratory and other support as needed. The agency will continue to monitor this situation closely and work with public health partners to rapidly test any incoming specimens and advise local and state authorities regarding control measures if needed. Long-term preparedness measures against H5N1 include the existence of a stockpile of H5N1 vaccine in the Strategic National Stockpile. 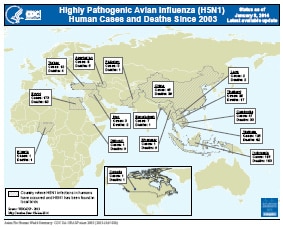 H5N1 is a virus that occurs mainly in birds, is highly contagious among birds, and can be deadly to them, especially domestic poultry. Since December 2003, highly pathogenic avian influenza A (H5N1) virus infections in birds have been reported in Asia, Africa, and Europe. H5N1 viruses are considered endemic (ever present) in poultry in at least six countries (alphabetically: Bangladesh, China, Egypt, India, Indonesia and Vietnam) with sporadic detection in wild birds and poultry outbreaks occurring in other countries. The virus also is circulating widely in other countries in those regions. From 2003 through December 10, 2013, 648 laboratory-confirmed human cases with H5N1 virus infection have been officially reported to WHO from 15 countries. Of these cases, 384 died (60%). At the current time, there is no ongoing transmission of any avian influenza A viruses in humans, including H5N1 viruses.

However, the H5N1 epizootic poses an important public health threat since influenza viruses evolve and swap genes frequently. If H5N1 viruses were to gain the ability for efficient and sustained transmission among humans, an influenza pandemic could result, with potentially high rates of illness and death worldwide. The Centers for Disease Control and Prevention (CDC), the World Health Organization (WHO) and Food and Agriculture Organization of the United Nations (FAO) conduct routine surveillance to monitor influenza viruses, including H5N1 viruses, for changes that may have implications for animal and public health.