Countries offer flu shots to health care workers, pregnant women, and others at high risk of complications from flu

As flu season is wrapping up in the United States, other parts of the world are bracing for the start of their seasons. Thanks to CDC guidance and donations from Partnership for Influenza Vaccine Introduction (PIVI), this year Laos is vaccinating against seasonal influenza for the third year running, and Nicaragua is vaccinating pregnant women against flu for the second year in a row. 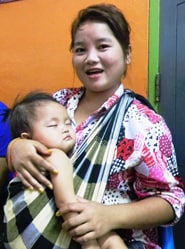 A baby naps in his mother's arms outside the flu vaccination clinic at Vientiane's busy maternal hospital. Laos, 2012.

Decades of experience have shown that flu vaccine is a cost-effective way to help prevent flu-related illness, hospitalization and death, missed school, and missed work. Despite the benefits of flu vaccination however, establishing a vaccination program remains out of reach for many lower-income countries. This was the case for Laos, which two years ago (2012) offered seasonal flu vaccine through a national program for the first time with help from PIVI. Nicaragua is one of many countries that already offered flu vaccine to some, but with PIVI’s help this year and last, has been able to expand vaccination to include more pregnant women.

This year’s PIVI donors include returning partner bioCSL who donated more than three quarters of a million doses of vaccine this year, Walgreens Company, and Amerisource Bergen (a new partner) which together donated flu vaccine and funds to purchase vaccine at reduced cost through the Pan-American Health Organization (PAHO) Revolving Fund. In addition, returning partner Becton Dickinson and Company (BD) donated ancillary supplies including syringes and safety boxes. The Partnership’s mission is supported by a grant from the Bill & Melinda Gates Foundation*awarded in 2013.

Over the next few weeks, the Laos Ministry of Health’s National Immunization Program will administer vaccine to pregnant women, health care and essential government workers, and people 50 years and older. The vaccine will be distributed throughout the country, primarily via provincial and district hospitals, and will be marked with an official launch in Luang Prabang, Laos on April 30.

For some, influenza (flu) infection opens the door to pneumonia and other life-threatening complications.

Pregnant women and people with certain medical conditions such as asthma and diabetes are at high risk of developing complications if they get the flu.

The best way to prevent the flu is by getting a flu vaccine every year.

Vaccination programs remain out of reach for many lower-income countries, despite the benefits of vaccination.

In Nicaragua, the donated flu vaccine is supplementing other vaccine purchased by the Government of Nicaragua. Nicaragua usually targets their flu vaccine supplies to children and health care workers; this is the second year that Nicaragua has expanded their seasonal flu vaccination program to vaccinate more pregnant women. Flu vaccine is being distributed via the country’s already-established network of flu vaccination sites.

Apart from this year’s donors, other PIVI partners have been instrumental in this season’s successful donation, shipment and administration of flu vaccine. A significant change this year has been the coordination of the PIVI program by the Task Force for Global Health’s Center for Vaccine Equity.

PIVI began as a pilot project in 2011 and reached its first milestone in 2012, when Laos Ministry of Health carried out their first-ever seasonal flu vaccination program with a flu vaccine donation from Walgreens Company. In 2013, Australia-based bioCSL, U.S. Department of Defense’s Air Force, and BD joined Walgreens as donating partners and together donated vaccine and supplies that UPS helped to ship at reduced cost for a second year in a row. Donors collaborated with the Ministries of Health of Laos and Nicaragua and together succeeded in providing flu vaccine for the countries’ respective target populations before their flu seasons picked up.

*In fall of 2012 the PIVI project was honored by former CDC Director Dr. Thomas Frieden with the CDC Director’s Award for Innovation. A year later, the project was awarded a grant by the Bill & Melinda Gates Foundation, and shortly after, the Global Health Task Force’s Center for Vaccine Equity joined the fold as secretariat and the project was officially named the Partnership for Influenza Vaccine Introduction.

The Partnership plays a pivotal role by supplying donated influenza vaccine and supplies to countries that lack those resources but that are otherwise ready to establish or expand their influenza vaccination programs. Country-led program evaluation and sustainability planning also are key components of the partnership’s mission.

Influenza is a global disease that adversely impacts the health of millions of people around the world each year. PIVI’s long-term vision is for everyone around the world – and especially high-risk persons – to have equitable access to seasonal influenza vaccine. Collaborating with PIVI allows eligible countries to learn how to manage a seasonal flu vaccination program, and to build to their evidence base and attract additional resources. Ultimately, the sustainability plan for each program will vary from country to country, ranging from country-owned manufacturing capacity to negotiation of pricing between vaccine manufacturer and country.

Flu vaccination is taking place in Nicaragua during Vaccination Week in the Americas (VWA). VWA is part of a wider global initiative called World Immunization Week, recognized by all regions of the World Health Organization.

PIVI’s mission is bolstered by the different but complementary work of other key organizations, including the WHO Global Action Plan for Influenza Vaccines-II, the United States’ influenza vaccine development program managed by Biomedical Advanced Research and Development Authority (BARDA), and the Global Alliance for Vaccines and Immunisation (GAVI).

PIVI’s mission also is aligned with CDC Influenza Division’s strategic international plan, which is focused on creating an evidence base for influenza control and prevention globally; communicating influenza-associated risks; and decreasing the global impact of influenza through provision of technical assistance and training and contributions to capacity building and research.

As a PIVI partner, CDC provides technical expertise and guidance on implementation of flu vaccination programs, and also facilitates communication among partners. Outside of PIVI, CDC Influenza Division’s International Program assists countries with setting up surveillance and laboratory systems for influenza.

Pregnant women are at high risk of developing serious complications if they get the flu. Changes in the immune system, heart and lung functions during pregnancy make pregnant women more likely to get seriously ill if they get the flu. Severe illness in a pregnant mother can be dangerous to her fetus because it increases the chances for serious problems such as premature labor and delivery. This is why CDC recommends that pregnant women get an annual flu vaccine. Pregnant women can be vaccinated against flu during any trimester of their pregnancy. Getting vaccinated protects the pregnant woman from the flu and can pass protective antibodies to her developing baby; those antibodies help protect the baby from influenza for up six months after he or she is born. Those first six months of life are a vulnerable time; babies can’t be vaccinated against influenza until they are six months old, so protection passed from mom when she is vaccinated during pregnancy is one way to ensure baby’s health during those first months of life.

Last year, when pregnant women in Laos got a flu vaccine, the nurse gave each woman a card and asked her to bring it back to the clinic when she was ready to deliver her baby. Weeks or months later, when expecting mothers came back with their cards and delivered their babies, the babies’ weights were recorded alongside the mothers’ influenza vaccination status. In a country where medical records are scarce and often incomplete, this information is providing Laos with important insight regarding the value of seasonal influenza vaccination to the health of mothers and babies. Notably, similar efforts in other countries have shown that influenza vaccination during pregnancy has been correlated with higher birth weights.

Flu vaccine arrives safely to Laos. The vaccine was flown to Bangkok from Germany, and arrived in Vientiane by truck.