Laos and Nicaragua Protect High-Risk Persons from Influenza, with Help from Donor Coalition and CDC 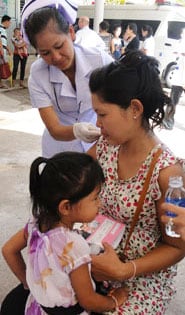 In Laos, a pregnant woman receives her seasonal flu shot.

In parts of Southeast Asia and Central America, flu activity is expected to pick up soon.

This season, thanks to a growing coalition of donors and facilitation by CDC, Laos is vaccinating against seasonal influenza for the second year running, and Nicaragua is expanding their existing flu vaccination program to pregnant women.

This CDC-facilitated flu vaccination project began last year with donation of flu vaccine to Laos by Walgreens Companyexternal icon. This year, Walgreens Co. is joined by other donors including bioCSL, U.S. Department of Defense, Becton, Dickinson and Company, and UPS. Together the donors have given flu vaccine, ancillary supplies and reduced shipping cost to Laos and Nicaragua to sustain and grow their seasonal flu vaccination programs and valuable guidance to Uganda in establishing a future influenza vaccination program.

In Laos, vaccine is being administered to pregnant women, health care and essential government workers, and people 50 years and older. The vaccine is being distributed in all seventeen provinces, primarily via provincial and district hospitals.

Last year, more than 90 percent of the flu vaccine was administered throughout the country in just over two weeks. Following the vaccination campaign, Laos collected its own data on adverse events following immunization, thanks to Laos Field Epidemiology Training students who conducted post-vaccination surveys and analyzed responses as part of a field assessment training module guided by CDC and World Health Organization. Data from the assessment indicate there were no serious adverse events, and only mild adverse events occurred following vaccination; further, the vaccine was widely accepted and the vast majority of people said they’d get vaccinated for flu again. (Decades of use of flu vaccine in the United States and other countries have shown that influenza vaccines are safe and serious adverse events are rare, but data specific to Laos are important for the Government of Laos in making future decisions about vaccine administration in their country.)

Did you know flu can be very serious, especially for pregnant women? Changes in the immune system, heart and lung functions during pregnancy make pregnant women more likely to get seriously ill if they get the flu. Severe illness in the pregnant mother can also be dangerous to her fetus because it increases the chance for serious problems such as premature labor and delivery.

When a pregnant woman gets vaccinated for flu, antibodies can be passed to her developing baby and helps to protect her baby for up to 6 months after he or she is born.

This year, when a pregnant woman receives her flu vaccine, the nurse will give her a card and ask her to bring it back to the clinic when she’s ready to deliver her baby. In this way, the babies’ weights will be recorded alongside the mothers’ influenza vaccination status. In a country where medical records are scarce and often incomplete, this will provide Laos with invaluable data regarding the value of seasonal flu vaccination to the health of their mothers and babies.

In Nicaragua, the donated flu vaccine is supplementing additional vaccine purchased by the Government of Nicaragua. Nicaragua usually targets flu vaccine for children and health care workers; this year, the donation is allowing Nicaragua to expand their seasonal flu vaccination program to include pregnant women.

Flu vaccine is being distributed via the country’s already-established network of flu vaccination sites. Like Laos, Nicaragua already has its own adverse events data, but also is planning to follow up with vaccinated pregnant women at their deliveries.

Apart from this year’s donors and CDC, other partners have been instrumental to this season’s successful donation, shipment and administration of flu vaccine. Those partners include Pan American Health Organization (PAHO) and PAHO’s Revolving Fund, United States Agency for International Development (USAID), World Health Organization and CDC Foundation.

As part of its mission, CDC Influenza Division’s International Program assists countries with setting up their own flu surveillance and flu vaccination programs, with an eye toward eventual self-sustainability. Donations provide resource-poor ministries of health with the chance demonstrate the value of influenza immunization, while gradually assuming the responsibility of sustaining the program using the country’s own resources. This ‘proof of principle’ was demonstrated by Laos in April 2012 and is being demonstrated again this season.

Apart from preventing seasonal flu, countries that have seasonal flu vaccination programs are, overall, better prepared to respond with vaccine during a pandemic by making use of tried-and-true flu vaccine distribution channels and administration sites.

Visit 2011 CDC influenza Division International Activities Annual Report to read more about CDC’s work with a wide range of international partners, including the World Health Organization, national ministries of health and others to build capacity to respond to pandemic influenza and to prevent and control seasonal influenza.