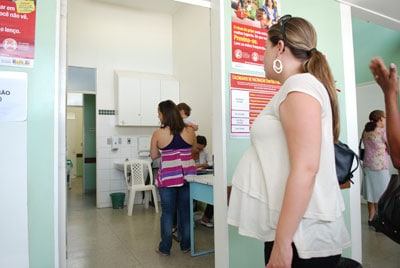 A pregnant woman waits in the doorway of a clinic to receive her vaccine. Brazil. 2014-2015 season.

Brazil is a large country with different climatic regions, and is responsible for influenza surveillance in more than two hundred million people. Since 2011, with CDC’s help through a cooperative agreement, the Ministry of Health has strengthened surveillance in order to understand the epidemiology of circulating viruses. This has allowed Brazil to better estimate its burden of influenza and expand its vaccination program beyond the elderly and select risk groups to include a greater emphasis on pregnant women and other vulnerable populations.

Morocco’s latest flu surveillance report indicates the country is currently experiencing its flu season. Influenza A (H1N1)pdm09, influenza A (H3N2), and influenza B viruses are co-circulating, with H1N1 viruses predominating and causing the majority of flu-related hospitalizations.

In 2006, Morocco began working under a cooperative agreement with CDC to conduct influenza surveillance. Since then, data from Morocco’s surveillance system have been used to estimate the country’s burden of influenza and define its seasonality, pointing to the possible benefit of Morocco having its own national flu vaccination program for certain groups. In light of those data, in 2013 Morocco worked with CDC to expand the country’s existing flu vaccine policy, and the next year Morocco implemented a larger influenza vaccination campaign. Morocco purchased 100,000 doses of vaccine as it had during previous years, and with technical expertise from CDC and help from the Partnership for Influenza Vaccine Introduction (PIVI) and The Task Force for Global Health, also received a donation of roughly 123,000 doses of vaccine. Morocco’s flu vaccination campaign targeted the elderly and persons with diabetes, two groups of people at high risk of flu-related complications, along with health care personnel, Hajj pilgrims and university students enrolled in health care programs. While Morocco’s vaccination policy had for years included mandatory flu vaccination for public sector health professionals and pilgrims traveling to Islamic holy sites, targeting persons at high risk of flu-related complications with a national campaign was a first for the country. Morocco drew on its existing network of diabetes clinics and distributed vaccine during roughly ten weeks from November 2014 to January 2015, resulting in a successful campaign. 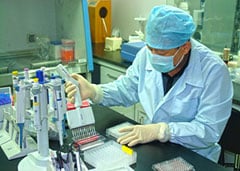 China CDC is responsible for influenza surveillance in 1.3 billion people. Thanks in part to a mutually beneficial collaboration with CDC’s Influenza Division over the past two decades, China’s National Influenza Center (CNIC) in Beijing was designated by the WHO as the fifth WHO Collaborating Center for Reference and Research on Influenza in humans in October 2010. With this distinction, China joined Australia, Japan, United Kingdom, and the U. S. CDC in playing a pivotal role in global influenza surveillance.