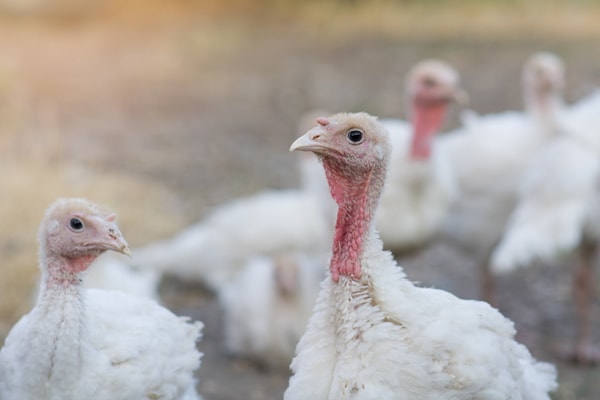 This is a picture of a flock of young turkeys. Some of the recent H5N1 bird flu infections in the United States have occurred in commercially raised turkeys. In mid-January, USDA first announced finding H5N1 bird flu viruses in wild birds pdf icon[333 KB, 11 Pages]external icon. This was followed by announcements of outbreaks of H5N1 bird flu in commercial poultry and backyard flocks.

March 7, 2022—To date, highly pathogenic avian influenza A(H5N1) viruses (“H5N1 bird flu viruses”) have been detected in U.S. wild birds in 14 statesexternal icon and in commercial and backyard poultry in 13 statesexternal icon, according to the U.S. Department of Agriculture’s (USDA) Animal and Plant Health Inspective Service (APHIS). Based on available epidemiologic and virologic information about these viruses, CDC believes that the risk to the general public’s health from current H5N1 bird flu viruses is low, however some people may have job-related or recreational exposures to birds that put them at higher risk of infection. CDC is watching this situation closely and taking routine preparedness and prevention measures in case this virus changes to pose a greater human health risk.

Right now, the H5N1 bird flu situation is primarily an animal health issue. The U.S. Department of Interior and USDA APHIS are the lead federal agencies for this situation. They are respectively responsible for outbreak investigation and control of bird flu in wild birds and in domestic birds (poultry). USDA has publicly posted the genetic sequences of several of the recently detected U.S. H5N1 bird flu viruses. These viruses are from clade 2.3.4.4b*pdf iconexternal icon, which is the most common H5N1 bird flu virus worldwide at this time. Comparing information about these newer viruses to previously circulating H5N1 bird flu viruses helps inform the human health risk assessment.

What is CDC Doing?

Given past human infections with bird flu viruses resulting from close contact with infected birds/poultry, sporadic human infections with current H5N1 bird flu viruses would not be surprising, especially among people with exposures who may not be taking recommended precautions (like wearing personal protective equipment, for example). Sporadic infections like that would not change CDC’s risk assessment. However, identification of multiple instances of H5N1 bird flu viruses spreading from birds to people, or of changes in the virus associated with adaptation to mammals, would raise CDC’s risk assessment. These changes could indicate the virus is adapting to spread more readily from birds to people. If limited, non-sustained human-to-human spread with this virus were to occur, that also would raise the public health threat because it could mean the virus is adapting to spread better between people. Note that sustained human-to-human spread is needed for a pandemic to occur.

As a general precaution, people should avoid direct contact with wild birds and observe them only from a distance, if possible. Wild birds can be infected with bird flu viruses without appearing sick. If possible, avoid contact with poultry that appear ill or have died. Avoid contact with surfaces that appear to be contaminated with feces from wild or domestic birds, if possible. CDC has information about precautions to take with wild birds. CDC also has guidance for specific groups of people with exposure to poultry, including poultry workers and people responding to poultry outbreaks. If you must handle wild birds or sick or dead poultry, minimize direct contact by wearing gloves and wash your hands with soap and water after touching birds. If available, wear respiratory protection such as a medical facemask. Change your clothing before contact with healthy domestic poultry and birds after handling wild birds, and discard the gloves and facemask, and then wash your hands with soap and water.  Additional information is available at Information for People Exposed to Birds Infected with Avian Influenza Viruses of Public Health Concern. As a reminder, it is safe to eat properly handled and cooked poultry and poultry products in the United States. The proper handling and cooking of poultry and eggs to an internal temperature of 165˚F kills bacteria and viruses, including H5N1 bird flu viruses.

Infected birds shed bird flu viruses in their saliva, mucous and feces. Bird flu infections among people are rare; however, human infections can happen when enough virus gets into a person’s eyes, nose, or mouth, or is inhaled. People with close or lengthy unprotected contact (not wearing respiratory protection or eye protection) with infected birds or places that sick birds or their mucous, saliva, or feces have touched, may be at greater risk of bird flu virus infection. Illnesses in people from bird flu virus infections have ranged from mild (e.g., eye infection, upper respiratory symptoms) to severe illness (e.g., pneumonia) that can result in death. The spread of bird flu viruses from one infected person to a close contact is very rare, and when it has happened, it has not led to continued spread among people.