This web page provides estimates on the burden of influenza and the effects of annual influenza vaccination in the United States for the 2019–2020 influenza season.

Influenza vaccination is the best way to protect against influenza and associated complications; however, more effective or longer lasting influenza vaccines are needed. Several efforts are currently underway to understand and investigate factors that contribute to reduced or increased vaccine effectiveness and inform changes to vaccine composition, formulations, or production (9-11).

Improvements in vaccine coverage could also provide a greater public health benefit, producing even greater reductions in illnesses and demands for resources from the health system. During influenza season, the health care system, including outpatient clinics, emergency departments, and hospitals, experience high patient volumes. Any reduction in influenza-associated medical visits and hospitalizations will reduce demands on the healthcare system stressed by the COVID-19 pandemic and improve healthcare providers’ abilities to provide the best care. Strategies to improve influenza vaccine coverage include: using patient reminder/recall systems aided by immunization information systems; expanding access to vaccination at pharmacies, workplaces, and schools; and organizing mobile and/or outdoor vaccination clinics that would allow for social distancing among patients and healthcare providers.

CDC estimates that influenza vaccination during the 2019–2020 influenza season prevented 7.52 million illnesses, 3.69 million medical visits, 105,000 hospitalizations, and 6,300 deaths associated with influenza. This report underscores the benefits of the current vaccination program, but highlights areas where improvements in vaccine uptake and vaccine effectiveness could deliver even greater benefits to the public’s health.

These estimates are subject to several limitations. First, influenza vaccination coverage estimates were derived from reports by survey respondents, not vaccination records, and are subject to recall bias. These coverage estimates are based on telephone surveys with relatively low response rates; nonresponse bias may remain after weighting for the survey design. Estimates of the number of persons vaccinated based on these survey data have often exceeded the actual number of doses distributed, indicating that coverage estimates used in this report may overestimate the numbers of illnesses and hospitalizations averted by vaccination. The model of averted illness calculates outcomes directly prevented among persons who were vaccinated. If indirect protection from decreased exposure to infectious persons in a partially vaccinated population (i.e., herd immunity) also occurred, the model would underestimate the number of illnesses and hospitalizations prevented by vaccination. Estimates of the averted burden in older adults, aged ≥65 years, do not reflect the increasing use of high-dose or adjuvanted influenza vaccines, which may have higher effectiveness compared with standard vaccines; nor does the estimate reflect that vaccine effectiveness might continue to decrease with age, reaching very low levels among the oldest adults who also have the highest rates of influenza vaccination. Finally, because the data and methods used to make these calculations are continually updated, current estimates are preliminary and will be updated when final data are available.

Previous estimates of the burden of illness, medical visits, hospitalizations, and deaths related to influenza and prevented by influenza vaccination are available online and in publications (1-5).  Past seasons’ estimates of influenza disease burden averted by vaccination, using the same methodology as for the 2019-2020 season, are available to provide context for the current season’s estimates.

How does CDC estimate the number of hospitalizations, illnesses, and medically-attended illnesses associated with influenza that occurred in the United States?

Rates of laboratory-confirmed influenza-associated hospitalization by age group were obtained from FluSurv-NET, a collaboration between CDC, the Emerging Infections Program Network, and selected state and local health departments in 13 geographically distributed areas in the United States that conduct population-based influenza surveillance. Reported hospitalization rates were adjusted using a multiplier to correct for underreporting, which is calculated from the percent of persons hospitalized with respiratory illness who were tested for influenza and the average sensitivity of influenza tests used in the surveillance hospitals. These values were measured from data collected during eight post-pandemic seasons; estimates of underreporting of influenza-related hospitalizations

The numbers of persons seeking medical care for influenza were then calculated using age group-specific data on the percentages of persons with a respiratory illness who sought medical care, which were estimated from results of the 2010 Behavioral Risk Factor Surveillance Survey (14).

All estimates were rounded to three significant digits.

How does CDC estimate the number of influenza-associated outcomes that were prevented with influenza vaccination?

The annual estimates of influenza vaccination coverage by month during each season and the final end-of-season vaccine effectiveness measurements were used to estimate how many persons were not protected by vaccination during the season and thus were at risk for these outcomes.

Estimates of 2019–2020 influenza vaccination coverage by month from July 2019 through April 2020, were based on self-report or parental report of vaccination status using data from the National Immunization Survey for children aged 6 months-17 years and Behavioral Risk Factor Surveillance Survey data for adults aged ≥18 years (12).

Vaccine effectiveness estimates for the 2019–2020 season were derived from the US Influenza Vaccine Effectiveness Network, a group of five academic institutions that conduct annual vaccine effectiveness studies. (13) The network estimates the effectiveness of vaccination for preventing influenza diagnosed by real-time reverse transcription polymerase chain reaction-positive testing among persons with acute respiratory illness of ≤7 days duration seen in hospitals, emergency departments, or outpatient clinics in communities in

Calculations were stratified by month of the year to account for annual variations in the timing of disease and vaccination and then summed across the whole season. The prevented fraction was calculated as the number of averted illnesses divided by the total illnesses that would have been expected in an unvaccinated population.

The Benefits of Flu Vaccination 2019-2020 Infographic 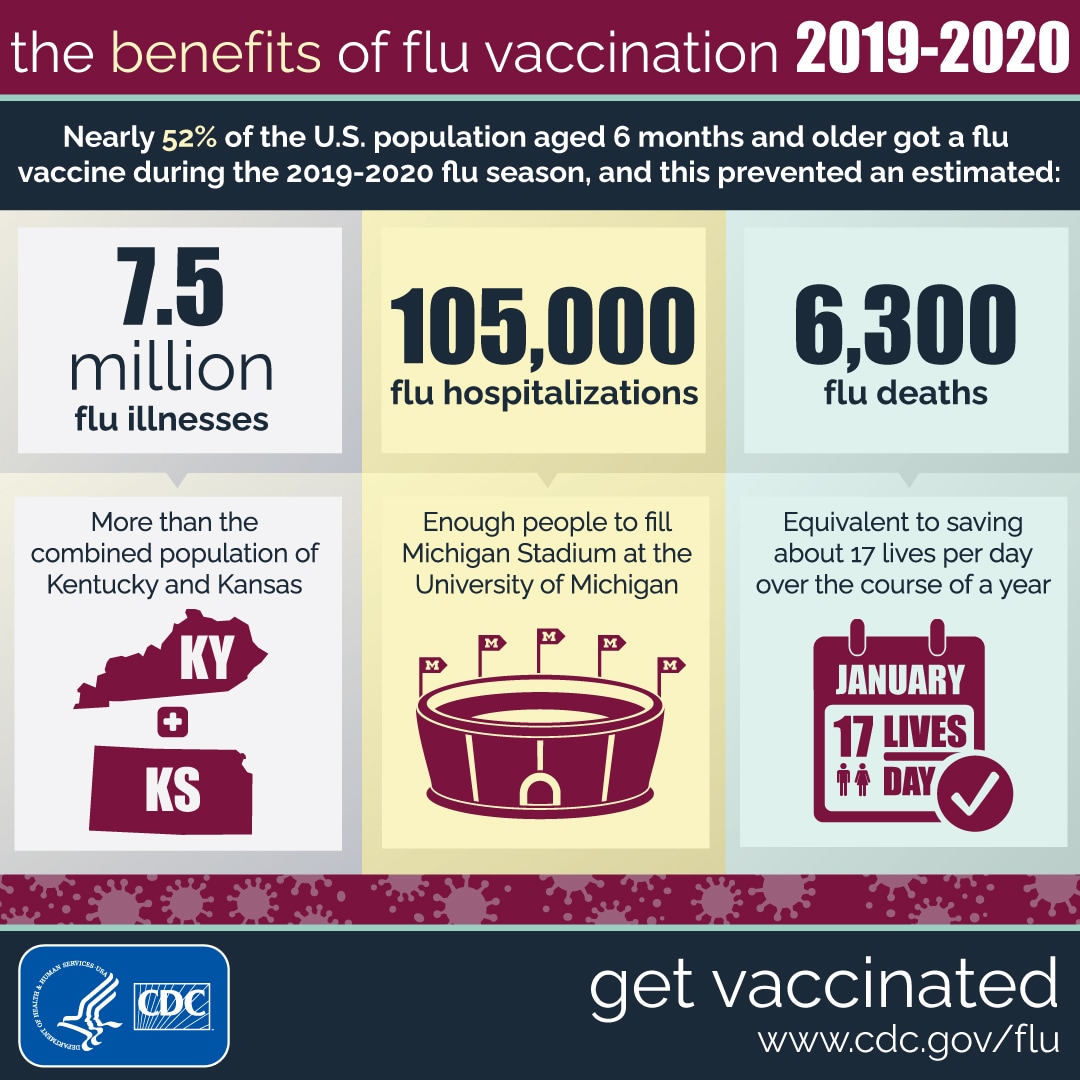 Nearly 52% of the U.S. population aged 6 months and older got a flu vaccine during the 2019-2020 flu season, and this prevented an estimated:

7.5 million flu illnesses, more than the combined population of Kentucky and Kansas.

105,000 flu hospitalizations, enough people to fill Michigan Stadium at the University of Michigan.

6,300 flu deaths, equivalent to saving about 17 lives per day over the course of a year.