This particular outbreak appears to be over. However, E. coli is still an important cause of human illness in the United States. More information about E. coli, and steps people can take to reduce their risk of infection, can be found on the CDC E. coli Web Page.

A total of 29 individuals infected with the outbreak strain of E. coli O26 have been reported from 11 states. The 4 new cases have been reported from Michigan, Pennsylvania, Washington, and West Virginia. Of the 27 ill persons with available information, 23 (85%) reported consuming sprouts at Jimmy John’s restaurants in the 7 days preceding illness.

Among 29 ill persons, illness onset dates ranged from December 25, 2011 to March 3, 2012. Ill persons range in age from 9 years to 57 years old, with a median age of 26 years. Eighty-nine percent of ill persons are female. Among the 29 ill persons, 7 (24%) were hospitalized. None have developed HUS, and no deaths have been reported.

Among these 24 ill persons, illness onset dates ranged from December 25, 2011 to February 15, 2012. Ill persons range in age from 9 years to 53 years old, with a median age of 26 years. Eighty-eight percent of ill persons are female. Among the 24 ill persons, 6 (25%) were hospitalized. None have developed HUS, and no deaths have been reported. Illnesses that occurred after February 19, 2012, might not be reported yet due to the time it takes between when a person becomes ill and when the illness is reported.

Among the 14 persons for whom information is available, illnesses onset dates range from December 25, 2011 to February 7, 2012. Ill persons range in age from 9 years to 49 years old, with a median age of 25 years old. One hundred percent of ill persons are female. Among the 14 ill persons, 2 (14%) were hospitalized. None have developed HUS, and no deaths have been reported. Illnesses that occurred after February 4, 2012, might not be reported yet due to the time it takes between when a person becomes ill and when the illness is reported.

CDC is collaborating with public health officials in multiple states and the U.S. Food and Drug Administration (FDA) to investigate a multistate outbreak of Shiga toxin-producing Escherichia coli serogroup O26 (STEC O26) infections likely linked with eating raw clover sprouts. Public health investigators are using DNA “fingerprints” of E. coli bacteria obtained through diagnostic testing with pulsed-field gel electrophoresis, or PFGE, to identify cases of illness that may be part of this outbreak. They are using data from PulseNet, the national subtyping network made up of state and local public health laboratories and federal food regulatory laboratories that performs molecular surveillance of foodborne infections.

The type of bacteria responsible for this outbreak are referred to as STEC. STEC bacteria are grouped by serogroups (e.g., O157 or O26). The STEC serogroup found most commonly in U.S. patients is E. coli O157. Other E. coli serogroups in the STEC group, including O26, are sometimes called “non-O157 STECs.” Some types of STEC frequently cause severe disease, including bloody diarrhea and hemolytic uremic syndrome (HUS). Others, such as common strains of STEC O26, typically cause milder illness. Currently, there are limited public health surveillance data on the occurrence of non-O157 STECs, including STEC O26; therefore, STEC O26 infections may go undiagnosed or unreported. Because non-O157 STEC infections are more difficult to identify than STEC O157, many clinical laboratories do not test for them. The STEC O26 PFGE pattern in this outbreak has rarely been seen before in PulseNet.

A total of 12 persons infected with the outbreak strain of STEC O26 have been reported from 5 states. The number of ill persons identified in each state is as follows: Iowa (5), Missouri (3), Kansas (2), Arkansas (1), and Wisconsin (1). Among persons for whom information is available, illness onset dates range from December 25, 2011 to January 15, 2012. Ill persons range in age from 9 years to 49 years old, with a median age of 25 years old. One hundred percent of ill persons are female. Among the 12 ill persons, 2 (17%) were hospitalized. None have developed HUS, and no deaths have been reported.

The outbreak can be visually described with a chart showing the number of people who became ill each day. This chart is called an epi curve. Illnesses that occurred after January 27, 2012, might not be reported yet due to the time it takes between when a person becomes ill and when the illness is reported. This takes an average of 2 to 3 weeks. All epi curves for this investigation are available on the epi curve page. Please see the E. coli Outbreak Investigations: Timeline for Reporting Cases for more details.

FDA’s traceback investigation is ongoing. Preliminary traceback information has identified a common lot of clover seeds used to grow clover sprouts served at Jimmy John’s restaurant locations where ill persons ate. FDA and states conducted a traceback that identified two separate sprouting facilities; both used the same lot of seed to grow clover sprouts served at these Jimmy John’s restaurant locations. On February 10, 2012, the seed supplier initiated notification of sprouting facilities that received this lot of clover seed to stop using it. Investigations are ongoing to identify other locations that may have sold clover sprouts grown from this seed lot.

This investigation is ongoing, but preliminary results of the epidemiologic and traceback investigations indicate eating raw clover sprouts at Jimmy John’s restaurants is the likely cause of this outbreak. CDC and state and local public health partners are continuing laboratory surveillance through PulseNet to identify additional ill persons and to interview ill persons about foods eaten before becoming ill. FDA is continuing to work closely with CDC and state partners during this investigation. CDC will update the public on the progress of this investigation as information becomes available.

Based on previous outbreaks associated with sprouts, investigation findings have demonstrated that sprout seeds might become contaminated in several ways. They could be grown with contaminated water or improperly composted manure fertilizer. They could be contaminated with feces from domestic or wild animals, or with runoff from animal production facilities, or by improperly cleaned growing or processing equipment. Seeds also might become contaminated during harvesting, distribution, or storage. Many clover seeds are produced for agricultural use, so they might not be processed, handled, and stored as human food would. Conditions suitable for sprouting the seed also permit bacteria that might be present on seeds to grow and multiply rapidly.

In 1999, FDA released guidance to help seed producers and sprout growers enhance the safety of their products. Specific measures recommended in the guidelinesExternal include a seed disinfection step and microbiologic tests of water that has been used to grow each lot of sprouts. The microbiologic tests currently recommended under this guidance would not identify the presence of STEC O26. 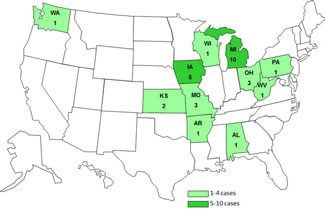 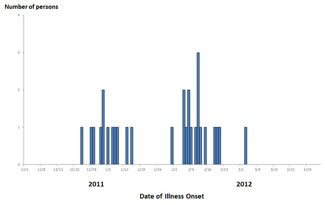