Archived Content: This Page Is No Longer Being Updated

This page is archived for historical purposes and is no longer being maintained or updated.

Please see Overdose Data to Action (OD2A) for the most recent information on CDC-funded programs. 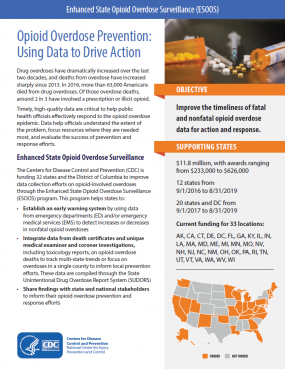 States will use the funding to:

As of September 2017, approximately $4.7 million was awarded for a program expansion. All awarded states and Washington D.C. will use the funding to:

Funding for enhanced and timely surveillance is one of CDC’s key investments to inform opioid overdose prevention efforts. These new investments are made possible with the increased funds that Congress appropriated to CDC in fiscal year 2016 and 2017, which support the agency’s overarching Overdose Prevention in States (OPIS) effort. As the opioid overdose epidemic evolves, CDC will continue to provide scientific expertise, enhance surveillance activities, and tailor resources to address states’ growing and changing needs.