A 27-year-old HIV-positive male presented with abdominal pain and chronic diarrhea. He had a history of AIDS cholangiopathy. Recent microbiology results included bacteremia caused by Enterobacter species and sputum cultures positive for Mycobacterium avium-complex (MAC). During routine examination of Gram-stained bronchial alveolar lavage (BAL) specimens, suspect objects were observed by the attending technologist. Additional BAL material was stained with calcofluor white and Gram chromotrope, and the suspect objects were observed being positive for both. Images were captured of the BAL stained with Gram chromotrope (Figures A and B) and sent to the DPDx Team for diagnostic assistance. Additionally, the BAL specimen was forwarded on to the DPDx Team for additional work-up. The DPDx Team prepared a fresh smear from the BAL, stained with chromotrope 2R, and observed similar objects at 1000x with oil (Figures C and D), which measured approximately 2.0 micrometers in length. What is your diagnosis? Based on what criteria? What additional tests, if any, would you recommend? 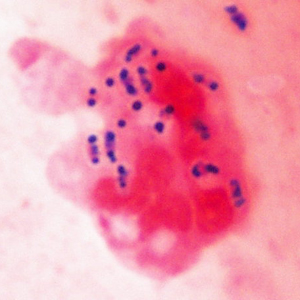 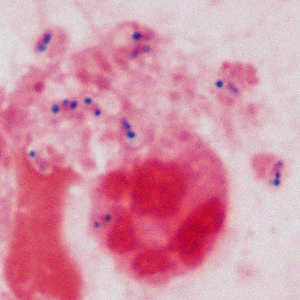 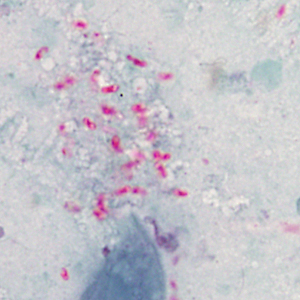 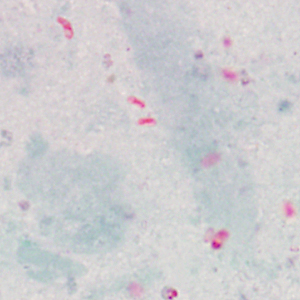 This was a case of microsporidiosis caused by Encephalitozoon intestinalis. Figures A–D showed vacuolated spores that were positive by both the Gram chromotrope and chromotrope 2R stains. Additionally, molecular testing and electron microscopy (EM) were performed on the BAL specimen by the DPDx Team and the CDC’s Infectious Diseases Pathology Branch, respectively. The EM demonstrated that the spores contained roughly 5 coils of the polar tubule (arrows, Figure E), which is suggestive of Encephalitozoon in combination with a size of roughly 2.0 micrometers. Molecular testing, including both a nested PCR test and sequencing analysis, confirmed the species as E. intestinalis. Interestingly, microsporidia were not observed in other clinical specimens. 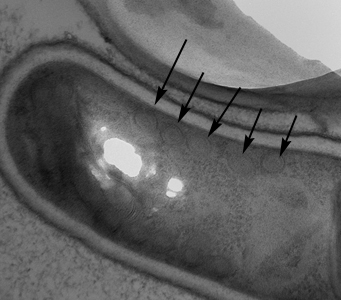 This case and images, in part, were kindly provided by the University of Texas Health Science Center, San Antonio, TX.