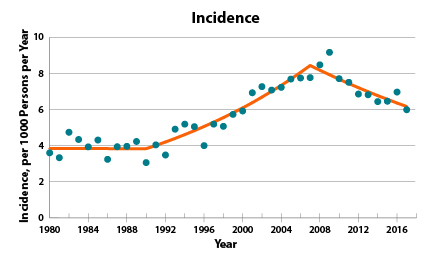 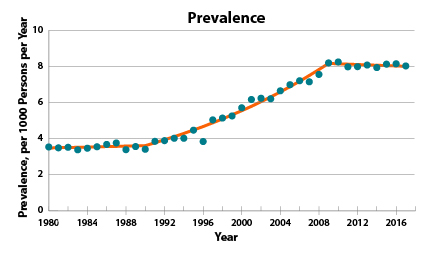 In addition, after increasing by 4.4 percent per year from 1990 to 2009, the percentage of people living with diagnosed diabetes in the United States has remained stable at about 8.0 percent from 2009 to 2017 (figure 2). This represents the longest sustained plateau in existing cases of diagnosed diabetes and the longest decline in new cases. Similar trends were seen across all ages, racial and ethnic groups, sexes, and education levels. The data, however, do not distinguish by type of diabetes, though type 2 diabetes typically represents about 90%–95% of diabetes cases.

While the causes of the plateau and decrease remain unclear, researchers suggest they may be driven in part by increased awareness of – and emphasis on – type 2 diabetes prevention, changes in diet and physical activity, and changes in diabetes diagnostic and screening practices. Trends in population subgroups suggest the decrease in new diabetes cases may have been driven primarily by a decrease in new cases of diagnosed diabetes in non-Hispanic white adults. The plateau seen in existing cases of diabetes may be due in part to  people with diabetes living longer.

Although these trends are encouraging, the overall burden of diabetes remains high and warrants continued intervention and monitoring. Today, more than 30 million Americans are living with diabetes, and 1 in 4 do not know they have it.

Learn more about diabetes in the United States and about type 2 diabetes prevention.