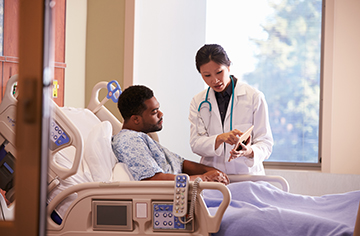 When a person is having a stroke, recognizing the signs and symptoms quickly is important to survival. During a stroke, as the minutes tick away, brain tissue in the areas that aren’t getting the blood and nutrients they need will die. Treating the patient quickly reduces the risk of serious disability or death.

Stroke treatment works best if the stroke is recognized and treatment begins within 3 hours of the first symptoms. One way to remember the signs and symptoms of stroke is to think F.A.S.T.: face drooping, arm weakness, speech slurred, time to call 9-1-1.

Coordination and teamwork across the stroke system of care—from ambulance to hospital to rehabilitation—are the keys to timely treatment. That’s why Mercy Medical Centerexternal icon and Mercy Rehabilitationexternal icon teamed up to reduce the time it was taking for staff at Mercy Rehabilitation to recognize that a patient might be having a stroke and transport them to the medical center.

With support from the Massachusetts Coverdell Program, a team that included the medical center’s stroke committee and stroke coordinator and staff from the rehabilitation facility was created. The team:

“The Mercy staff wanted a more coordinated approach to ensure that everyone knew what they should do and to ensure that the next caregiver in the response relay would be fully informed when they received the patient.”

The team set an ambitious goal of 30 minutes from when a possible stroke is first recognized at the rehabilitation facility to the time the patient receives a computed tomography (CT) scan at the medical center. A CT scan can show whether the patient is having a stroke, what type of stroke it is, and whether the clot-busting medicine alteplase should be given.

The team reviewed recent stroke data on patients suspected of having a stroke and the associated response times. They used the PDSA (Plan-Do-Study-Act) quality improvement tool to create and continually evaluate the effectiveness of the new protocol.

This tool helped the team:

The new stroke protocol outlined the responsibilities of all rehabilitation facility staff, including a clinical team made up of a doctor, nurse, and rapid response team. All rehabilitation staff were trained on the new protocol, including using the acronym “F.A.S.T.” to recognize the signs and symptoms of stroke and how to respond.

The doctor first uses the National Institutes of Health Stroke Scale (NIHSS) to assess the severity of the stroke symptoms. The doctor then orders that the patient be transferred to the medical center, calls the stroke code, and determines whether a CT scan is needed. The doctor and nurse also tell the staff at the medical center about any medicines the patient is receiving, especially medicines to prevent blood clots. The nurse records the time when the patient was last known to be well, an important measure in deciding whether the patient is eligible for alteplase.

Information about the stroke protocol and NIHSS are posted in the rehabilitation facility where staff can see them. Clinical staff regularly take tests on how to recognize and respond to a possible stroke. All staff take part in “mock codes,” a type of medical fire drill in which staff practice responding to a suspected stroke.

As a result of the new protocol, potential stroke patients got faster care, which likely improved their outcomes. The rehabilitation staff recognized the importance of faster recognition and treatment for their stroke patients and embraced the changes.

“The team created this new process, but they understand that you can’t just say, ‘Okay, we’re done with that, let’s move on to the next thing,’ ” said Van Dusen. “They have to keep constantly assessing and reevaluating, and they continue to do that.”

Seven stroke alerts were called from August to December 2020, after the new protocol was established at Mercy Rehabilitation. Only two of the seven patients were found to have had a stroke. The false alarms are expected to occur and staff consider it better to send someone to the hospital and be wrong than to delay treatment for a patient who could suffer serious disability or death if not treated quickly.

“They were beyond excited by the impact of the new protocol,” said Van Dusen. “And what was so critical to their success was that they didn’t do this in a silo, but worked as a team.” 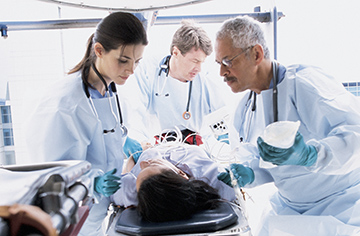 Education and training, including practice in mock codes, were key to helping staff understand their responsibilities and recognize the importance of a fast response.

Posting information about the stroke response protocol and NIHSS where staff could continually see and review them was also helpful. Sharing the successes that resulted from the new protocol has reinforced the staff’s efforts.

The principles outlined by Mercy Medical Center and Mercy Rehabilitation can be applied to help other prehospital, in-hospital, and posthospital settings develop protocols to better coordinate care for patients. Hospital case managers already work with staff at facilities and agencies that are part of the continuum of care. These relationships can help build and strengthen stroke care partnerships with emergency medical services and rehabilitation centers.

“We try to emphasize every opportunity to move away from silos and show agencies how their collaboration is essential to getting the patient the best care as quickly as possible.”