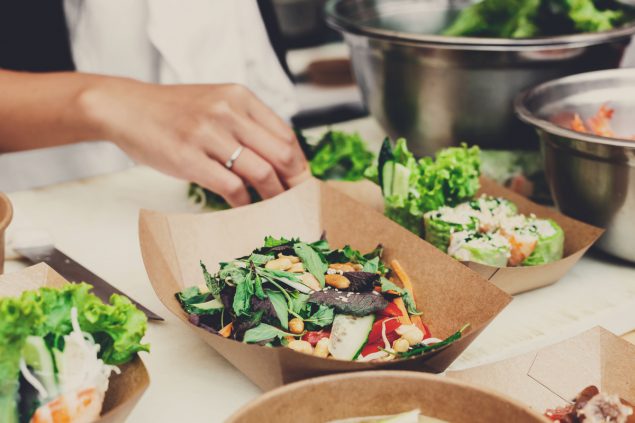 With support from the New York City Department of Health and Mental Hygiene (NYC DOHMH), Richmond University Medical Center (RUMC) is increasing the availability of healthier options and reducing the amount of sodium served in its cafeteria by adopting the New York City Food Standards for Cafeterias/Cafesexternal icon.

RUMC removed all high sodium soups and entrées from its menu, improved beverage offerings, and added healthier snack options at the cash register.

Consuming too much sodium can increase blood pressure, a leading risk factor for heart disease and stroke. In New York City, the average adult consumes about 3,200 mg of sodium every day, nearly 40% more than the recommended daily limit of 2,300 mg, according to a study published in the American Journal of Public Health.

Most sodium is added to foods during manufacturing or preparation. The widespread availability of inexpensive processed foods, large portion sizes, and persistent advertising of processed foods can make it challenging to stay within the recommended sodium limits.

RUMC in Staten Island pledged to implement the New York City Food Standards for Cafeterias/Cafes in an effort to reduce sodium in the foods and beverages offered by its cafeteria, which serves about 800 people daily.

Eleven of the 25 standards address sodium reduction, including increasing the availability of fresh fruits and vegetables and reducing sodium in soups, sandwiches, and entrées. NYC DOHMH assessed the cafeteria, including 434 food and beverage items across a 13-week menu.

From the assessment, RUMC and NYC DOHMH developed a tailored action plan, which outlined short-, medium-, and long-term goals to meet the standards.

RUMC increased the number of standards met from 9 to 15. To meet short-term goals, RUMC removed entrées with more than 800 mg of sodium per serving, including a pork loin entrée, a chicken burrito, and a pork taco. Twelve high sodium soups were replaced with lower sodium options, removing an average of 300 mg of sodium from each soup.

As a hospital, it’s part of our mission to support the health of everyone who passes through our doors. By making it easier for customers to make healthy choices in the cafeteria every day, we’re making a commitment to their health.

RUMC will continue to work on reducing high sodium options in its cafeteria by adopting more standards. RUMC plans to comply with the standard for prepackaged snacks by removing or replacing current snack offerings to meet nutrition criteria, including 200 mg of sodium or less per package.

The medical center also plans to remove high-calorie beverages in containers that exceed 16 oz. The NYC DOHMH will continue to provide guidance through menu and product reviews, onsite assessments, and promotional materials.

Find out more by contacting the Healthy Eating Unit at the New York City Department of Health and Mental Hygieneexternal icon.

This project is supported by the Centers for Disease Control and Prevention (Cooperative Agreement CDC-RFA-DP161607external icon) and the New York City Department of Health and Mental Hygiene.