About 1 in 7 children have hypertension, also known as high blood pressure, a condition that increases their lifetime risk for heart disease and stroke.1 Health care professionals advise reducing the amount of sodium in children’s diets to lower their blood pressure, but this is not easy for parents and other caregivers to do, given that children often prefer high sodium, highly processed foods like pizza, chicken nuggets, and chips.2

Cornell Cooperative Extension Niagara County took on this challenge by working with Head Start programs that feed preschool children. Cornell Extension partnered with Community Action Organization (CAO), which runs 30 Head Start locations serving 2,000 families in New York’s Niagara and Erie counties. Children who attend these preschools receive breakfast, lunch, and a snack every day they are at school. This makes up one third of the meals they eat in a week, creating a valuable opportunity to reduce their sodium intake. Cornell Extension’s goal was to lower the amount of sodium in the meals served to Head Start preschoolers in these counties.

Children living in the United States consume about twice as much sodium as health experts recommend,3 and hypertension is becoming common in younger and younger children.

The types of foods children in the United States like to eat can make it difficult for their parents and caregivers to reduce sodium intake. In fact, the 10 most popular food categories in children’s diets account for about 40% of their sodium intake.3 One challenge for school food service workers is that these processed foods are typically easier to prepare, less expensive, and available in bulk. 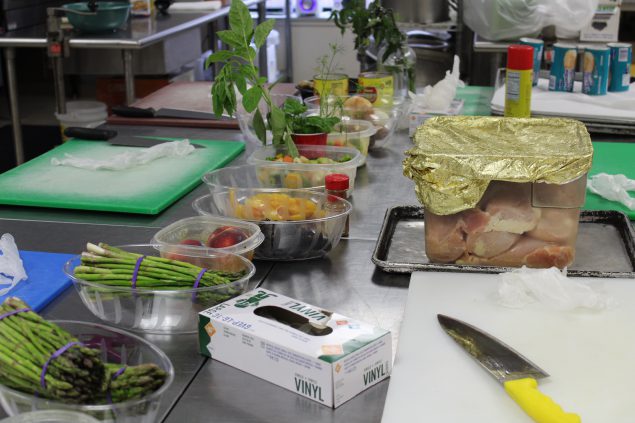 A station set up by Niagara County for nutrition and food service staff of Holy Cross Head Start for a staff training to demonstrate lower sodium cooking techniques.

Cornell Extension assisted the nutrition and food service staff at each of the 30 Head Start locations by conducting menu reviews, identifying high sodium ingredients, and suggesting changes that would reduce sodium levels in preschool menus.

Review often. Lower sodium ingredients were sometimes unavailable because of the pandemic, and replacements for other items were often higher in sodium than the original ingredients. Cornell Extension took on the job of regularly reviewing food distributors’ offerings so that food service workers could switch to lower sodium items as they became available.

Stay flexible. Head Start food service staff responded to mandatory quarantines by preparing to-go meals for children. These meals had to be inexpensive and prepared in bulk, which often means higher sodium. To avoid this, the Cornell Extension worked with Head Start staff to improve efficiency and modify to-go menus to cut down on sodium.

Highlight successes. The partners kept track of progress made by food service staff in reducing sodium levels in kids’ meals and mentioned those successes during annual menu planning sessions, encouraging staff to keep up the good work.

Cornell Extension will continue to work with CAO to create short video trainings for food service staff on how to reduce sodium during meal preparation. The team will also update the organization’s nutrition policy to reflect the Dietary Guidelines for Americans, 2020–2025 [PDF – 32.5 MB], as well as complete the steps in Heart-Healthy Meals in Early Childhood [PDF – 2 MB], which provides a step-by-step process on how to make sure that lower sodium meals are offered in early childhood education centers.

Use the SRCP Implementation Guide to apply sodium reduction strategies derived from the SRCP into your communities.