University at Buffalo Slashes the Salt Across Campus 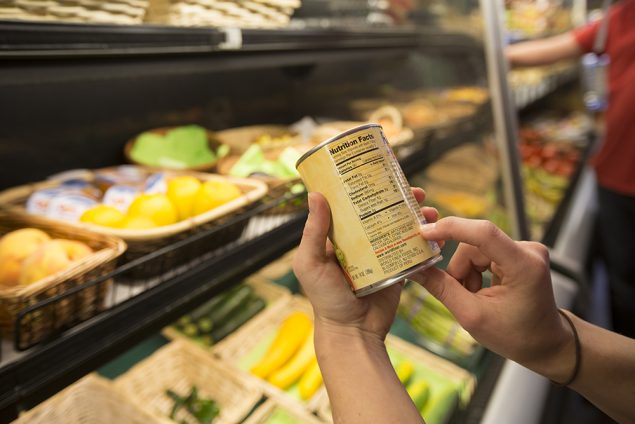 Cornell Cooperative Extension (CCE) of Niagara County, New York, is partnering with the University at Buffalo (UB) Campus Dining and Shops to reduce sodium in campus meals and snacks. Every day, UB serves 34,000 students and faculty in three dining centers and 40 retail units.

High blood pressure is a major risk factor for heart disease and stroke, two of the leading causes of death in New York State. One in three Erie County adults (33%) have diagnosed high blood pressure, according to the 2017 Behavioral Risk Factor Surveillance System. High sodium diets can increase the risk of high blood pressure, and most of the sodium in the American diet comes from processed food.

Students at UB rely on campus dining for most of their meals, including dining centers, carry-out locations, and convenience options. Some deli meats, sides, and premade items served contain excess sodium. Grab & Go meals and snacks are a convenient option for busy students; however, among the 125 Grab & Go items offered by UB, the average sodium content is over 1,000 mg. The Dietary Guidelines for Americansexternal icon recommends no more than 2,300 mg of sodium daily.

The university sells 2,000 Grab & Go items per day, including sandwiches, wraps, and fruit and vegetable cups. CCE and UB focused on the Grab & Go products to decrease the sodium and increase Smart Choice options. These items are available throughout campus, so small changes have a big impact on sodium reduction. CCE conducted taste testing with the students and staff to test the acceptability of the changes.

UB offers six varieties of hummus and pretzels. Replacing the traditional pretzel with an “everything” flavored pretzel reduced sodium by 44%. The hummus recipe was also modified to further reduce sodium, from 1,250 mg to 610 mg on average. White flour sandwich wraps were replaced with a lower sodium version, which resulted in a 42% sodium reduction.

The promising practices at UB are being disseminated to other institutions. The State University of New York Culinary Summit is an annual education opportunity for chefs from New York State colleges. CCE staff will present at this event each year about the sodium reduction initiative and successes through the partnership and will encourage other institutions to start monitoring the amount of sodium they serve.

This project is supported by the Centers for Disease Control and Prevention (Cooperative Agreement CDC-RFA-DP161607external icon, administered by CDC’s Division for Heart Disease and Stroke Prevention) and the New York State Department of Health Sodium Reduction in Communities Programexternal icon.