History of the Coverdell Program 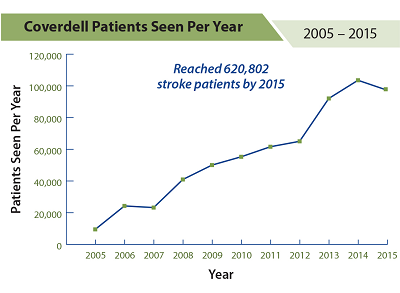 Through the Coverdell program, 13 states have received funding to establish partnerships and work to improve the quality of stroke care throughout a stroke patient’s health care journey—from the first stroke symptom to their return home.

In 2012, as the program expanded, the name was changed to the Paul Coverdell National Acute Stroke Program (PCNASP).

During 2001–2004 (the prototype phase), CDC funded eight PCNASR prototype registries. The registries, led by academic principal investigators and medical institutions, collected data on the quality of care provided to stroke patients from the initial emergency response through hospital discharge. This prototype phase was used to determine how best to develop stroke quality improvements registries, identify which data elements could and should be collected, and identify challenges involved in data collection.

In June 2004, CDC provided initial funding to the state health departments of Georgia, Illinois, Massachusetts, and North Carolina to implement PCNASRs and begin collecting data in 2005.

The purpose of these registries was to build partnerships with hospital doctors, stroke-care teams, and administrators. Through these partnerships, the states would develop and implement systems for collecting data on acute stroke care provided to patients, analyze the collected data, and use the results of those analyses to guide quality improvement interventions at the hospital level. All acute care hospitals serving the general population in participating states were eligible for the program.

In the first year of program activities, the four funded states had established partnerships, developed strategies for identifying and recruiting eligible hospitals, and selected and implemented customized Web-based data collection systems for hospital use.

In the second and third years, states reviewed collected data to identify and work with hospitals on specific areas for quality improvement. The states then evaluated progress toward improving statewide acute stroke care and promoting long-term changes in how that care is provided.

During 2005–2007, a total of 190 hospitals participated in a stroke registry. The percentages of total statewide stroke admissions treated by participating hospitals ranged from 40% to 79% among the four states.

Also in 2007, CDC, The Joint Commission’s Primary Stroke Center Certification program, and the American Heart Association/American Stroke Association’s Get With the Guidelines-Stroke program jointly released standardized stroke performance measures. This effort increased collaboration and encouraged hospitals to participate in one or more of the programs. The National Quality Forum endorsed eight of these performance measures in 2008.

Through the three-year cooperative agreement, states focused on improving the care given to stroke patients from the time they had a stroke. Select states piloted working with emergency medical services (EMS) agencies to improve EMS care for suspected cases of stroke, the transition from EMS to hospital care, hospital care, and the transition from hospital to the next care setting.

In July 2015, CDC funded nine state health departments in California, Georgia, Massachusetts, Michigan, Minnesota, New York, Ohio, Washington, and Wisconsin. Through this five-year cooperative agreement, funded states work to develop comprehensive stroke systems to improve the quality of care for patients from the time they have a stroke until after they are discharged from the hospital and follow up with their primary care doctor.

The goals of the most recent awards are to focus on pre-hospital quality of care as well as the post-hospital transition of care from hospital to home and the next care provider. All grantees will develop robust quality improvement programs for EMS that improve stroke diagnosis in the field and improve the transition from EMS to hospital emergency departments.