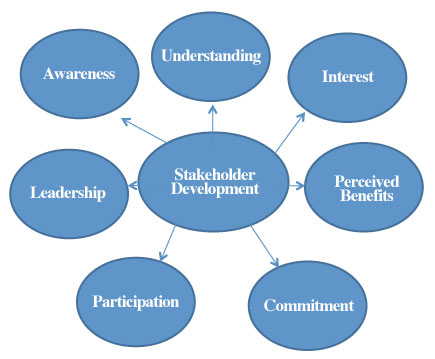 Stages of stakeholder development include:

The process in Minnesota and Massachusetts involved identifying stakeholders and moving them along a continuum of development from awareness to understanding, interest, perceived benefits, commitment, participation, and, finally, leadership. Some stakeholders may leap ahead in the process, but most will start at an early stage, such as awareness, and they must be cultivated at that stage before they can be asked to move to the next. For example, an employer who has never heard of CHWs may not be ready to take a leadership role in advocating for a policy change that might affect their organization in ways they don’t understand.

Officials in both states have noted that “the time seemed to be right” and most stakeholders joined in the process readily. Experience suggests that the greatest hurdle is in persuading stakeholders to sign on to an initiative after they have acknowledged credibility of the claimed benefits of CHWs. Anyone involved in processes of change has experienced a reaction such as, “That all sounds very good, but I’m really busy right now,” or “…, but this is not among my top priorities.”