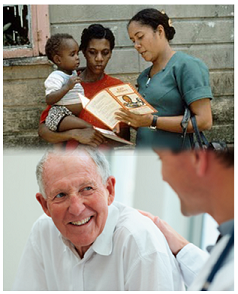 Other sustainable funding sources for CHW positions include:

A number of potential strategies exist beyond the major funding sources already described.

A number of states contract with private firms to provide services to Medicaid beneficiaries such as chronic disease management. Some of these companies, on their own initiative, have developed strategies involving CHWs to achieve the required results.

States and the federal government may also choose to mandate or provide incentives for contracting organizations to include CHWs in service delivery for major categorical programs, such as Federally Qualified Health Centers and the Ryan White HIV/AIDS Program. Various studies have suggested that federally qualified health centers tend not to employ CHWs out of their core Section 330 funding. Relatively simple policy changes could establish employment of CHWs as a priority.

A more direct strategy could be simply to qualify CHWs as a class of providers under major public insurance programs. Minnesota’s experience, which we will discuss in the next session, illustrates the openness of Medicaid officials at CMS to such proposals. Federal Medicaid officials have sponsored demonstrations in 20 states on strategies to divert frequent users of emergency rooms to more appropriate sources of care. Most of these demonstrations involve CHWs in some capacity. A recent (January 2014) change in federal Medicaid rules for preventive services allows states to authorize payment for preventive services provided by non-licensed individuals, including CHWs.

Less attention has been given to state-funded efforts to engage CHWs in public health. For a number of years, Kentucky and New Mexico have funded CHW positions for categorical programs out of general state revenues. The Kentucky HomePlace program has been in operation for over 20 years, and may be the largest single state appropriation for CHW services in the country. CHWs in the program helps people mainly in rural Appalachian counties access health care and other services. The New Mexico Healthy Start program received state appropriations for several years, and when an attempt was made to terminate the program’s funding, a groundswell of public opinion compelled legislators to restore the funding. The Massachusetts Prevention and Wellness Trust Fund has in its first year awarded grants exclusively for CHW initiatives.

States and localities have the flexibility to use block grant funding to employ CHWs for a variety of purposes. A recent special funding effort for Social Services Block Grants in the area of Texas affected by Hurricane Ike resulted in the short-term employment of more than 100 CHWs, some of whom continued to work for the grantee organizations after the funding ended.

Preparedness efforts are a relatively untried area for support of CHW positions. Various commentators, including CHWs, have noted that the impact of disasters like Hurricane Katrina might have been mitigated if CHWs had been better integrated into preparedness and disaster response efforts. In many low- income communities, individuals and families maintain their fragile existence only with the help of formal and informal social networks. An event such as a hurricane can completely disrupt these social arrangements and cause emotional and social disruption on a major scale. If CHWs played a role in disaster response, including emergency communications, some of this disruption could be avoided.

Recent research has shown that many community residents do not trust official communications from government agencies in emergencies. CHWs, teamed with first responders, can direct relief efforts to the most vulnerable individuals in a given community.