Where Is Certification in Place? 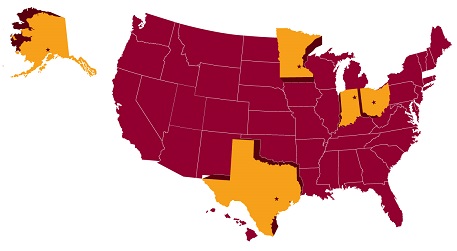 The first universal certification for CHWs was established in Texas and Ohio, which require all CHWs who are compensated for their work to be certified. These programs were put in place in 2002 and 2003. Alaska and Indiana actually initiated the first certification programs for CHWs in the early 1990s, but these programs were limited to CHWs participating in specific programs. More recently, South Carolina began certifying CHWs for employment in a Medicaid pilot program, with the intention of broadening certification in future years.

Minnesota established a CHW regulation program in 2008, but it does not technically constitute certification because it applies only to CHWs who want their services to be billable to Medicaid.

Florida began certifying CHWs on the basis of experience at the end of 2014 through the Florida Certification Board, an agency independent of the state government, and Oregon has begun certification as required in 2013 legislation creating their “coordinated care organization” health reform initiative.

Other states are also considering the question of CHW credentialing. In 2010, a Virginia regulatory board found that licensure was not necessary for CHWs, because there was no evidence that unlicensed CHWs posed any harm to the public. CHW advocates in Virginia are pursuing other avenues to establish standards for the occupation. Licensing boards in New York and Massachusetts have reached similar conclusions. Most recently, the Massachusetts Legislature established a CHW certification board, which was due to release regulations early in 2015. Leaders in California, Illinois, New Mexico, and New York, among other states, are currently discussing the need for CHW certification.