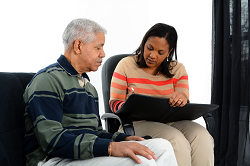 The following are impacts of credentialing CHWs:

Occupational standards for CHWs have only been in place for a few years, and no systematic studies of the impact of credentialing have been conducted. However, interviews with stakeholders in Texas and Ohio suggest that credentialing has had limited impact, primarily because it was implemented more or less in a vacuum. In other words, related policies were not coordinated with the occupational regulation of CHWs.

In both states, relatively few CHWs have been certified. The maximum number in Ohio hovers around 200. In Texas, which has more aggressive training programs, the numbers of certified CHWs have grown steadily since 2009; almost 2,700 Texas CHWs were certified as of the end of 2013, and the renewal rate has improved slightly in recent years, but was still only at 47 percent in 2013.