Status of the CHW Occupation (Cont.) 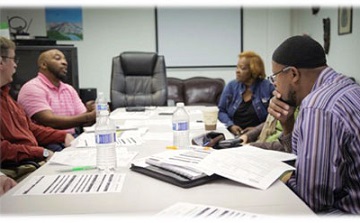 Much work remains to be done to clarify boundaries between CHWs and other professions.

The current status of the CHW occupation is as follows:

Because of the short-term nature of most CHW positions, many employers view CHWs as marginal to their operations, and little thought has been given to systematic job design, standardized training, or career advancement. As short-term project or “casual” employees, CHWs also often do not receive the fringe benefits offered to other employees.

Various federal agencies have supported CHW activities since the 1960s, again generally through short-term grants, but only recently have these agencies taken a systematic look at their investment in CHW interventions or CHWs as a workforce. A high-level working group has been formed in the Department of Health and Human Services, led by key agencies such as CDC, HRSA, and the Centers for Medicare & Medicaid Services, or CMS, and this working group is currently reviewing their activities with a view toward more coordinated policies.

Within the last 10 years, the field of community-based participatory research (CBPR) has gained prominence, becoming an agency-wide interest within the National Institutes of Health, or NIH. This type of research attempts to remedy some of the past shortcomings of empirical social research, whose practitioners and funders have been accused of exploiting communities and abandoning them after short-term research studies. CBPR creates partnerships between communities and researchers, who collaborate on design and implementation of the research itself, and invest in building long-term community capacity. Researchers have begun to discover the potential of CHWs as leaders in this type of research.

Within a given community, and certainly within a state, CHW programs may operate with widely different definitions, standards, training, and patterns of compensation. This variation is due in large part to persistent “silo” funding, in which CHW interventions are designed and implemented according to the needs of a particular health condition, disregarding organizations and CHWs “across the street” who are performing similar functions to address a different health condition. Although programs have legitimate requirements for job- specific training and information, they have generally missed opportunities to collaborate with other programs on the common functions and core competencies CHWs need to work on all health issues.

Studies estimate that volunteers constitute one-fourth to one- third of all CHWs. Volunteer CHWs are fundamentally different from volunteers in other health professions in that they do not also hold paid positions as CHWs. Other volunteers, such as nurses, are usually either retired or contributing time outside their regular paid positions. Although self-organized groups of community members sometimes undertake community health initiatives, many special projects are organized by institutions, such as large medical providers, that rely on volunteers to carry out their objectives. This is a frequent practice in the case of research projects with modest funding. These projects operate in an ethical “gray area.” since this use of volunteers might be considered exploitive.

Lastly, much work remains to be done to clarify boundaries between CHWs and other professions. As the definition of the CHW occupation becomes clearer, these boundaries should also be clarified. We will return to this topic in the next few slides.