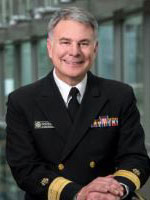 RADM Mac Kenzie is the Deputy Director for Science in the Center for Surveillance, Epidemiology, and Laboratory Services. CSELS is a cross-cutting center that acts as an interface between CDC programs and state and local health departments, focusing on surveillance, data science, workforce development, laboratory systems, and information dissemination. As a leader in CSELS, Dr. Mac Kenzie oversees the management and improvement of about 40 of CDC’s scientific services. He is currently working with partners to develop of new innovative services for public health surveillance such as electronic case reporting and harmonized data vocabulary standards.

Over the course of his career Bill led the investigation of the largest documented outbreak of waterborne disease associated with a public water supply (cryptosporidiosis in Milwaukee, Wisconsin); supervised and trained over 35 officers in CDC’s Epidemic Intelligence Service (EIS) – many of whom are now in leadership positions throughout the agency; engaged in emergency preparedness and response planning to breaches in health security, including pandemic influenza; led studies on the treatment of drug-susceptible and drug-resistant tuberculosis and authored over 50 manuscripts published in peer-reviewed journals.