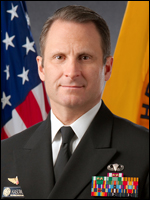 Dr. Kasowski joined CDC in 2009 as Chief Preparedness Officer in the Influenza Division. He was on the leadership team of the Epidemiology and Laboratory Task Force during the H1N1 pandemic influenza response. Previously, as a public health physician in the U.S. Navy, he helped shape military humanitarian missions to focus on high-impact public health interventions; reformulate the Navy’s public health system in Asia; and strengthen the Navy’s pandemic influenza preparedness and response efforts. Dr. Kasowski also served in the U.S. Army as a public health veterinarian from 1991–1994, focusing on zoonotic and foodborne illness control in the military operational environment.

He received his DVM from the University of Illinois and his MD from the Uniformed Services University of the Health Sciences (USUHS). He completed a residency in general preventive medicine and public health at USUHS. Dr. Kasowski is a Captain in the U.S. Public Health Service.