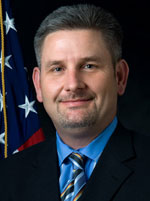 Mr. Clark has worked in public health for 25 years, serving at city, county, state, and federal levels. Early in his career, Mr. Clark was a disease intervention specialist and HIV/STD program supervisor assigned to numerous city and county health departments in Texas. Early in the HIV epidemic, Mr. Clark was instrumental in developing case investigation techniques to provide a better understanding of HIV transmission. He went on to serve as the Statewide Manager for HIV cases reported with no identified risk. Mr. Clark also served as Director of the National Prevention Training Center at the Texas Department of Health. His career includes a role as an expert consultant to the U.S. Army European Regional Medical Command on public health issues impacting U.S. troops and the citizens of four European countries.

With extensive experience in the development and implementation of alternative communications technologies to support emergency operations, Mr. Clark has played a key role in coordinating public health responses to H1N1, hurricanes Katrina and Rita, the September 11, 2001 terrorist attacks and anthrax threats, among other emergencies. He was instrumental in the implementation of HF/VHF/UHF technologies to support public health emergency responses.