After morbidity, mortality, and other relevant data about a health problem have been gathered and compiled, the data should be analyzed bytime, place, and person. Different types of data are used for surveillance, and different types of analyses might be needed for each. For example, data on individual cases of disease are analyzed differently than data aggregated from multiple records; data received as text must be sorted, categorized, and coded for statistical analysis; and data from surveys might need to be weighted to produce valid estimates for sampled populations.

For analysis of the majority of surveillance data, descriptive methods are usually appropriate. The display of frequencies (counts) or rates of the health problem in simple tables and graphs, as discussed in Lesson 5, is the most common method of analyzing data for surveillance. Rates are useful — and frequently preferred — for comparing occurrence of disease for different geographic areas or periods because they take into account the size of the population from which the cases arose. One critical step before calculating a rate is constructing a denominator from appropriate population data. For state- or countywide rates, general population data are used. These data are available from the U.S. Census Bureau or from a state planning agency. For other calculations, the population at risk can dictate an alternative denominator. For example, an infant mortality rate uses the number of live-born infants; rates of surgical wound infections in a hospital requires the number of such procedures performed. In addition to calculating frequencies and rates, more sophisticated methods (e.g., space-time cluster analysis, time series analysis, or computer mapping) can be applied.

To determine whether the incidence or prevalence of a health problem has increased, data must be compared either over time or across areas. The selection of data for comparison depends on the health problem under surveillance and what is known about its typical temporal and geographic patterns of occurrence.

Basic analysis of surveillance data by time is usually conducted to characterize trends and detect changes in disease incidence. For notifiable diseases, the first analysis is usually a comparison of the number of case reports received for the current week with the number received in the preceding weeks. These data can be organized into a table, a graph, or both (Table 5.5 and Figures 5.2 and 5.3). An abrupt increase or a gradual buildup in the number of cases can be detected by looking at the table or graph. For example, health officials reviewing the data for Clark County in Table 5.5 and Figures 5.2 and 5.3 will have noticed that the number of cases of hepatitis A reported during week 4 exceeded the numbers in the previous weeks. This method works well when new cases are reported promptly.

Table 5.5 Reported Cases of Hepatitis A, by County and Week of Report, 1991

Table 5.5 Reported Cases of Hepatitis A, by County and Year of Report, 1991

Analysis of long-term time trends, also known as secular trends, usually involves graphing occurrence of disease by year. Figure 5.1 illustrates the rate of reported cases of malaria for the United States during 1932–2003. Graphs can also indicate the occurrence of events thought to have an impact on the secular trend (e.g., implementation or cessation of a control program or a change in the method of conducting surveillance). Figure 5.2 illustrates reported morbidity from malaria for 1932–1962, along with events and control activities that influenced its incidence.( 2) 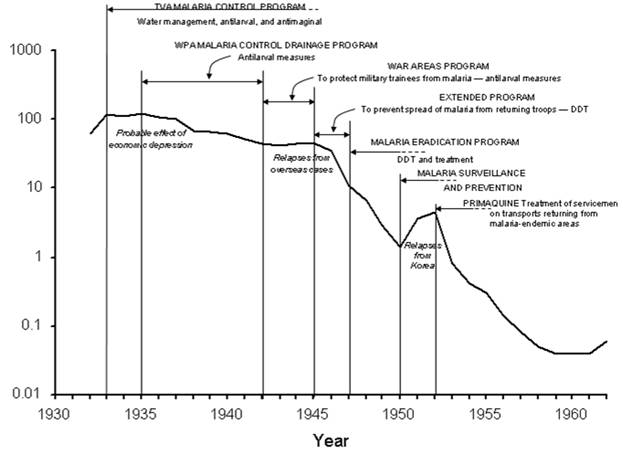 Statistical methods can be used to detect changes in disease occurrence. The Early Aberration Detection System (EARS) is a package of statistical analysis programs for detecting aberrations or deviations from the baseline, by using either long- (3–5 years) or short-term (as short as 1–6 days) baselines.(16)

The analysis of cases by place is usually displayed in a table or a map. State and local health departments usually analyze surveillance data by neighborhood or by county. CDC routinely analyzes surveillance data by state. Rates are often calculated by adjusting for differences in the size of the population of different counties, states, or other geographic areas. Figure 5.3 illustrates lung cancer mortality rates for white males for all U.S. counties for 1998–2002. To deal with county-to-county variations in population size and age distribution, age-adjusted rates are displayed.

The advent of geographic information systems (GIS) allows more robust analysis of data by place and has moved spot and shaded, or choropleth, maps to much more sophisticated applications.(17) Using GIS is particularly effective when different types of information about place are combined to identify or clarify geographic relationships. For example, in Figure 5.4, the absence or presence of the tick that transmits Lyme disease, Ixodes scapularis, are illustrated superimposed over habitat suitability.(18) Such software packages as SatScan™(Martin Kulldorff, Harvard University and Information Management System, Inc., Silver Spring, Maryland), EpiInfo™ (CDC, Atlanta, Georgia), and Health Mapper (World Health Organization, Geneva, Switzerland) provide GIS functionality and can be useful when analyzing surveillance data.(19–21) 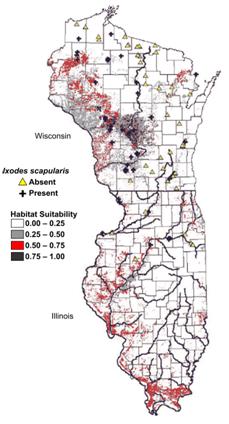 Analyzing by time and place

As a practical matter, disease occurrence is often analyzed by time and place simultaneously. An analysis by time and place can be organized and presented in a table or in a series of maps highlighting different periods or populations (Figures 5.5 and 5.6).

The most commonly collected and analyzed person characteristics are age and sex. Data regarding race and ethnicity are less consistently available for analysis. Other characteristics (e.g., school or workplace, recent hospitalization, and the presence of such risk factors for specific diseases as recent travel or history of cigarette smoking) might also be available and useful for analysis, depending on the health problem.

Meaningful age categories for analysis depend on the disease of interest. Categories should be mutually exclusive and all-inclusive. Mutually exclusive means the end of one category cannot overlap with the beginning of the next category (e.g., 1–4 years and 5–9 years rather than 1–5 and 5–9). All-inclusive means that the categories should include all possibilities, including the extremes of age (e.g., <1 year and ≥84 years) and unknowns.

To use data in the calculation of rates, the age categories must be consistent with the age categories available for the population at risk. For example, census data are usually published as <5 years, 5–9, 10–14, and so on in 5-year age groups. These denominators could not be used if the surveillance data had been categorized in different 5-year age groups (e.g., 1–5 years, 6–10, 11–15, and so forth).

Other Person- or Disease-Related Risk Factor

For certain diseases, information on other specific risk factors (e.g., race, ethnicity, and occupation) are routinely collected and regularly analyzed. For example, have any of the reported cases of hepatitis A occurred among food-handlers who might expose (or might have exposed) unsuspecting patrons? For hepatitis B case reports, have two or more reports listed the same dentist as a potential source? For a varicella (chickenpox) case report, had the patient been vaccinated? Analysis of risk-factor data can provide information useful for disease control and prevention. Unfortunately, data regarding risk factors are often not available for analysis, particularly if a generic form (i.e., one report form for all diseases) or a secondary data source is used.

When the incidence of a disease increases or its pattern among a specific population at a particular time and place varies from its expected pattern, further investigation or increased emphasis on prevention or control measures is usually indicated. The amount of increase or variation required for action is usually determined locally and reflects the priorities assigned to different diseases, the local health department’s capabilities and resources, and sometimes, public, political, or media attention or pressure.

For certain diseases (e.g., botulism), a single case of an illness of public health importance or suspicion of a common source of infection for two or more cases is often sufficient reason for initiating an investigation. Suspicion might also be aroused from finding that patients have something in common (e.g., place of residence, school, occupation, racial/ethnic background, or time of onset of illness). Or a physician or other knowledgeable person might report that multiple current or recent cases of the same disease have been observed and are suspected of being related (e.g., a report of multiple cases of hepatitis A within the past 2 weeks from one county).

Observed increases or decreases in incidence or prevalence might, however, be the result of an aspect of the way in which surveillance was conducted rather than a true change in disease occurrence. Common causes of such artifactual changes are:

Artifactual changes include an increase in population size, improved diagnostic procedures, enhanced reporting, and duplicate reporting. Compare the sharp increases in disease incidence illustrated in Figures 5.7 and 5.8. Although they appear similar, the increase displayed in Figure 5.7 represents a true increase in incidence, whereas the increase displayed in Figure 5.8 resulted from a change in the case definition.(22, 23) Nonetheless, because a health department’s primary responsibility is to protect the health of the public, public health officials usually consider an apparent increase real, and respond accordingly, until proven otherwise. 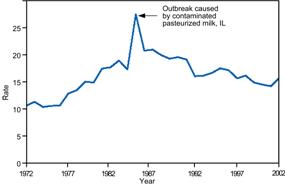 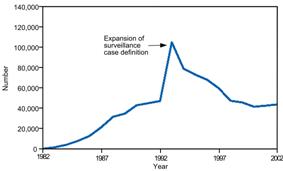 * Total number of AIDS cases includes all cases reported to CDC as of December 31, 2002. Total includes cases among residents in the U.S. territories and 94 cases among persons with unknown state of residence.

Description: Line graph of reported cases over time shows a dramatic increase corresponding to an outbreak caused by contaminated, pasteurized milk in Illinois. Return to text.

Description: Line graph of reported cases over time shows a dramatic increase in reported cases corresponding to an expansion of the surveillance case definition. Return to text.